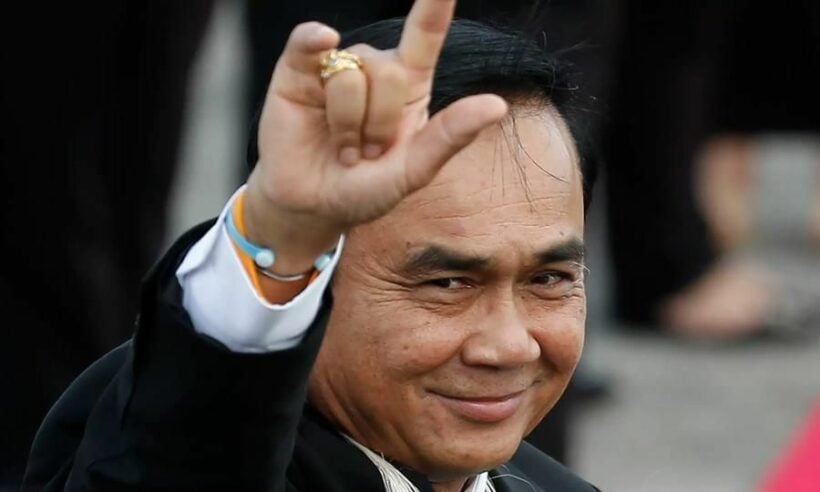 PHOTO: PM Prayut does not plan to call an early election despite rumours and frustration within the government. (via Twitter)

Amid a scattered Covid-19 response and vaccine rollout, and plenty of political fingerpointing and whispers, government officials dismiss rumours that PM Prayut Chan-o-cha will call an early special election. The rumours gained traction after the prime minister urged cabinet members to hasten their work as the administration had only 1 year left, when in fact the 4-year term ends in March 2023, 22 months away.

PM Prayut’s comments at the time included remarks for government agencies to be ready to pass on their projects to the next ruling government. The remark, along with reports of discord within the government’s coalition of parties, further fueled speculation. Some experienced politicians are predicting a snap election by next year, implying that the Covid-19 pandemic is the only thing that kept PM Prayut and the current government from being ousted already.

Proponents of the prime minister are said to have considered the “1 year left” remark to be just incentivisation for the government to produce results. Sources in the Democrat Party were reported to believe there’s no reason for the PM to expect a snap election now or after the 2022 fiscal year budget is passed.

But inner conflict persists. The reduced power of the Public Health Ministry after the cabinet granted emergency Covid-19 enforcement power to PM Prayut has frustrated the Bhumjaithai Party. They also disagree with budget spending proposals. PM Prayut has kept dissent down by threatening to dissolve the House, and many believe if Covid-19 is resolved and the economy starts to recover, squabbling coalition members would fall into place.

The Palang Pracharat Party currently holding power is said the be preparing for the next election. They are predicted to join the Ruam Thai Sang Chart, a new party formed just 3 months ago, in order to strengthen waning support.

The PPRP will struggle to maintain a majority, putting PM Prayut’s position in jeopardy in the next election. And even if they do win, a new candidate may be proposed for the prime minister as many feel PM Prayut, along with many others in charge through the fumbling pandemic handling, has worn out his welcome.

But as long as power is maintained in the senate, PM Prayut has a good chance at keeping his position, unless public pressure grows significantly endorsing the charter amendment proposed to no longer allow the senate to select a prime minister. This ace in the hole, along with support in provinces that benefitted most from his financial aid packages during Covid-19 may be enough to keep him in power otherwise.

The director of the Office of Innovation for Democracy at King Prajadhipok’s Institute believes that PM Prayut will hold power until 2027 and that only 140 House seats are needed in the next election for the PPRP to retain power, not the 250 that many estimates, as the party has seen defectors from other parties join.

Experts agree though that the fumbled Covid-19 response and sluggish vaccination efforts have damaged the prime minister and ruling government, and that getting the situation under control is imperative. Also, universal healthcare would be a big support gainer or at least some financial guarantees like pension payments. Finally, the PM could curry public favour by involving them more in government policy and taking tangible steps to fight rampant corruption, both of which create an “us versus them” perception in many citizens.