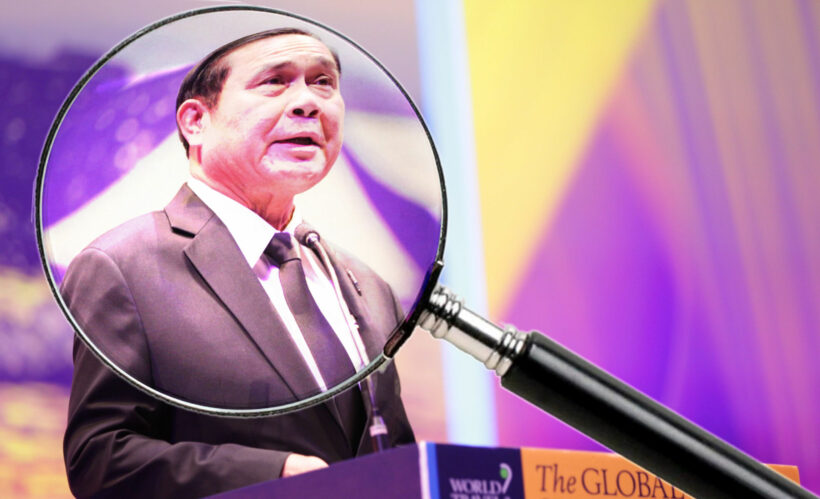 PM Prayut is under scrutiny as a coalition of parties want to remove him from office. (via Wikimedia)

Members of some of the parliament’s smaller parties confirmed the existence of a rumoured plot brewed amongst a coalition of parties to unseat PM Prayut Chan-o-cha. The revelation and confirmation of this plot details the effort of several parties to come together and remove the Prime Minister from power.

The New Palangdharma Party said that it will take a coalition of many of the small parties in the parliament along with the larger parties to turn the tide. The party leader seemed to confirm rumours that one of the most powerful opposition parties leading the charge, Pheu Thai, has been negotiating a deal with some key figures in the Palang Pracharath Party in power now to vote for PM Prayut’s removal.

Nothing is simple in Thailand and the political negotiations between parties opposing and partnering, sometimes simultaneously, is often tumultuous. The rumours of a secret deal between Pheu Thai and some PPRP leaders were questioned by the opposition Move Forward Party with many believing rebellious or politically ambitious PPRP leaders are involved in an ouster plot.

Of note, controversial PPRP member Deputy Minister of Agriculture and Cooperatives Thamanat Prompow has been rumoured to be prepping for a takeover bid, a rumour he denies. Sceptics point out that Thamanat and PPRP leader Deputy Prime Minister Prawit Wongsuwan were conspicuously absent from the cabinet members named in the no-confidence proceedings.

Some also note that while the attacks on PM Prayut and the other named cabinet members have been fierce, the defence has been a bit lacklustre and lacking passion. The prime minister acknowledged he was aware of the coalition rumours, which led to speculation about dissolving the House and a whole shuffle in political alliances, but PM Prayut says he intends to continue the course and ride out his 4-year-term.

There are about a dozen small parties with less than 10 parliament members, 9 of which have only one MP, totalling about 20 votes. If they all band together with the bigger opposition parties, they could reach the threshold with about 212 votes to take out PM Prayut. But then an outsider would likely be brought in to replace the prime minister and would have to garner the support of the PPRP and the Pheu Thai as they hold a combined total of 250 votes.

The splintering support for PM Prayut leading to the coalition of opponents stems from a battle between the PM and Prawit and Minister of Interior Anupong Paochinda over their desire to install Jatuporn Buruspat as Secretary for Interior in order to strategise an advantage for the next election. That rift had caused 40 MPs to express support for replacing Prayut, but 20 of them were talked down by supporters of the prime minister.

Today is the last day of a 4-day censure debate leading to a vote tomorrow where members of parliament could deliver a vote of no confidence for the Prime Minister and 5 other cabinet ministers. The debate has seen those accused defending their policies and actions regarding Covid-19 and vaccine management as well as general economic woes and a shocking accusation yesterday that PM Prayut gave 5 million baht each to several MPs to guarantee a vote in his favour, a charge the PM emphatically denies.

Griff1315
I would like to wish them all the luck in the world. However I sincerely doubt any of them are any different.
javada88
Whatever will be, the result will guaranteed continuing chaos.
DiggR
A chunk in the armor perhaps, hopefully they will continue probing.
Jason
The PM didn't get to be PM by a free, democratic, truly representative process. What makes anyone think he will be removed by a free, democratic, truly representative process??
Paco
How can you run a country and want to run a country if the population do not want you...  It means time to resign and leave instead of annoying people by staying and forcing people to obey you.. is useless …