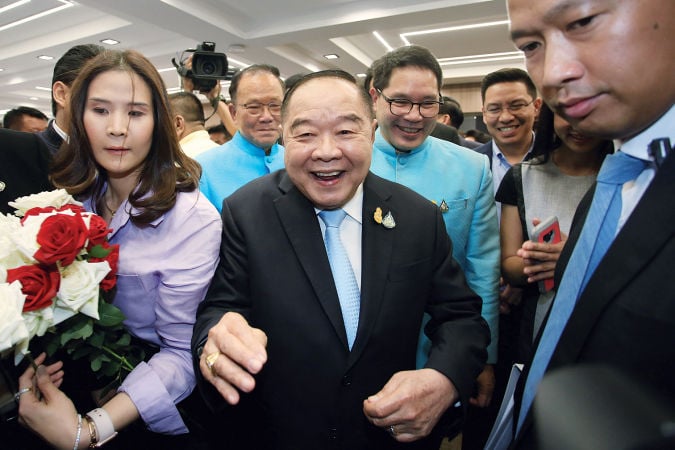 Economic concerns and doubts over the government’s legitimacy may mean it only maintains a grip on power for two years, according to academics.

The situation is not helped by Deputy PM General Prawit Wongsuwan being made chief strategist of the Phalang Pracharat party. According to Titipol Phakdeewanich, Dean of Ubon Ratchathani University’s Political Science faculty, this only seems to strengthen the belief that the military is controlling the coalition.

Titipol says that when General Prayut Chan-o-cha, head of the junta-backed government, was confirmed as PM following the election, it sent a clear message that the military wanted to keep hold of the reins of power. He maintains the Deputy PM and his party will continue enticing more opposition MPs to join them, to boost the coalition’s slim majority in the House of Representatives.

According to Titipol, Prayut needs to make good the mistake he made during the ceremony before he took office, where he was accused of not reading the entire oath.

“Prayut doesn’t need to resign, and nor will the government collapse. Former US president Barack Obama had to be sworn in again after he made a similar mistake in 2009, when he took office for the first term.”

Another political scientist, Somjai Phagaphasvivat, draws attention to Thailand’s struggling economy and doubts over the coalition’s legitimacy, citing these as two major challenges facing the government. He says that while Prawit’s power combined with Prayut’s charisma may be in their favour, failure to deliver will mean trouble.

He adds that the government must prove it stands by freedom of expression, a cornerstone of democracy.

Meanwhile, Gothom Arya, from Mahidol University’s Institute of Human Rights and Peace Studies, says he reckons the government will stay in office for two years because politicians are not ready for another election.

He also called for freedom of expression to be restored, particularly given that Thailand has a civilian government. Gothom also agreed that the premier should take his oath again, “otherwise Prayut’s reputation will be tarnished forever.”