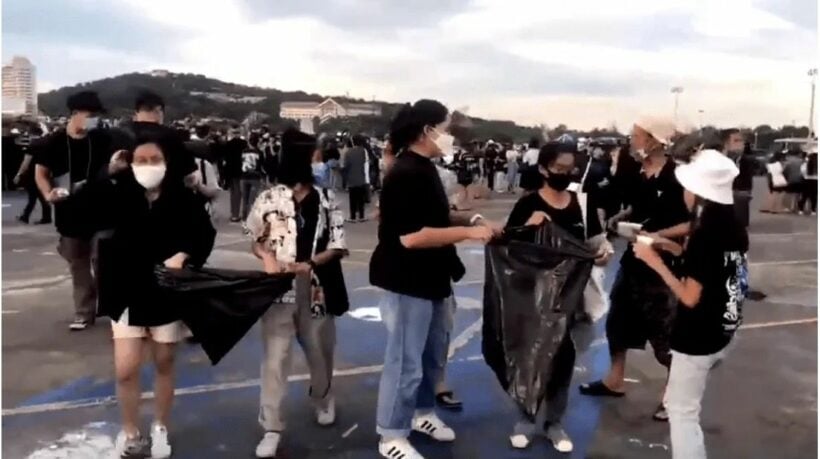 The eastern province of Chon Buri was the scene of a peaceful anti-government protest yesterday evening. The rally attracted a large crowd who afterward cleaned Bang Saen beach.

The demonstration comes on the heels of several larger protests in Bangkok and elsewhere this week, and was led by a group calling themselves the Youth Liberation Front. No official number of participants was announced but while estimates by organisers and law enforcement varied, the event was peaceful.

Police monitored the scene but did not interfere. Local officials were also present, but only to help control traffic and observe, ostensibly to ensure physical distancing and Covid-19 precautions were observed such as mask wearing and social distancing.

Organisers of the protest are made 3 demands which corresponded with the demands at protests in Bangkok, Chiang Mai and Ubon:

Without giving details, protesters have said that if these demands aren’t met within a few weeks, they’ll step up the severity and intensity of protests.

After the rally the crowd went to Bang Saen beach were collected trash and cleaned the area, telling reporters they wanted to show they support the general community.

The government has repeatedly said that the recently extended Emergency Decree is not political and has nothing to do with protests. It removed a ban on public gatherings from the decree this week, but warned that political rallies must still follow public assembly laws. The Chon Buri provincial government gave no public statement on the rally or whether they felt any laws were broken.