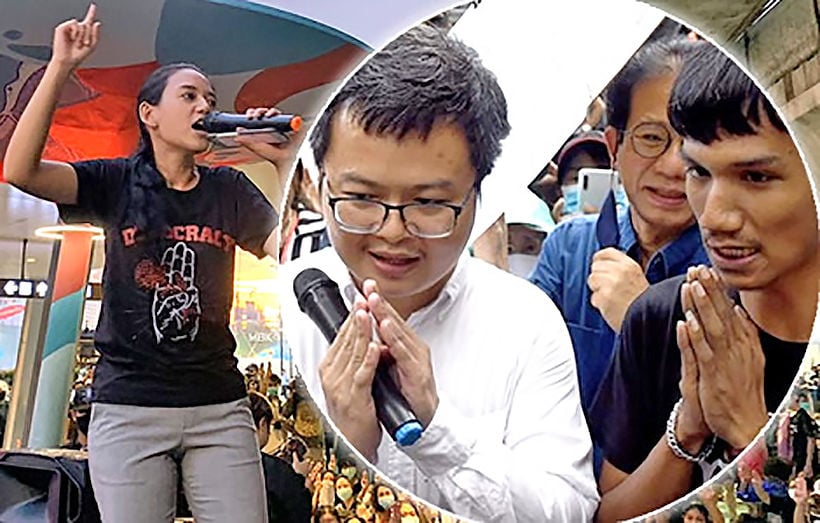 2 protest leaders arrested on Friday were granted bail following a court sitting in Bangkok yesterday. The court granted activist lawyer Arnon Nampa and a student named Panupong Jaadnok, alias “Mike Rayong” bail. The court pointedly warned them not to engage in similar behaviour while on bail. Immediately afterward, Arnon defiantly told reporters he was headed to Chiang Mai to take part in today’s  protest against the government.

Bail was set at 100,000 baht each. The pair face 7 charges, the most serious of which is an offence under Section 116 of the Criminal Code for “inciting unrest and sedition” which carries a 7 year jail term.

Police told the court they’re “seeking to interview” at least 6 more people in connection with their investigation. Reports on Friday and yesterday suggested that arrest warrants for up to 29 more people connected with the July 18 protest in Bangkok may be sought. Police have suggested that they are still seeking between 15 and 16 people on the basis of arrest warrants but that 31 suspects in all are concerned with the case.

After the court appearance, Arnon argued vigorously with police that the duo were being detained unlawfully as the court had not granted an order for their continued detention. This led to them being forcibly taken away in a police vehicle. Police have 48 hours after the execution of an arrest warrant to produce an accused person before the court.

They were later visited at Huai Khwang police station by Pheu Thai Party chief strategist Khunying Sudarat Keyuraphan and MPs from the House of Representatives. Sudarat emphasised her party’s support. She appealed to the government and PM Prayut Chan-o-cha not to use the law to intimidate people. She also emphasised the need for understanding so that all sides do their utmost to ensure that the arrests do not lead to unrest or violence. Arnon, for his part, urged supporters by note to “take good care’ of student protestors in Bangkok.

“I know a rally has been called at the Skywalk near the cultural centre at 4pm today. I’d like to ask our older members to take good care of the students. Whatever will be, will be.”

A crowd appeared on yesterday afternoon at Bangkok’s Skywalk and were addressed by student leaders who defied repeated calls by police to disperse because the assembly was “illegal.”

Arnon is due to speak at Chiang Mai’s Thapae Gate at 5pm. He’s promised to address the same subjects and theme he spoke about on Monday, when he controversially included references to Thailand’s Monarchy, which he said he supports, but has fears in relation to democratic rights and the current constitutional provisions.