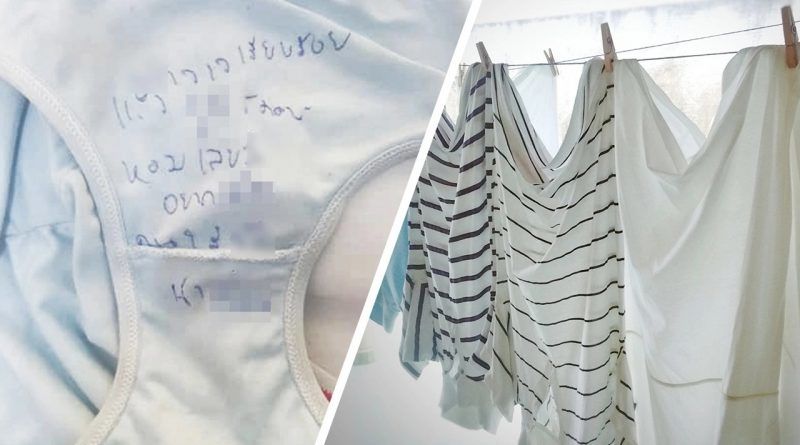 …we should clarify that the woman wasn’t wearing the underwear at the time.

Hua Hin has a creative freelance writer on the loose who has been choosing the medium of women’s underwear to share his words of wisdom. But the messages have been salacious in content and causing a great deal of distress for the owner of the underwear who had been hanging her ‘smalls’ at the rear of her house.

A 30 year old spa employee, Keepet Petsri, in the coastal town of Hua Hin is asking police detectives to catch the man who has been writing tasteless and rude messages on her underwear. The clothing was hanging to dry behind her apartment, according to Thai Rath.

Keepet Petsri on her Facebook page… “Urgent warning. Don’t forget to collect your underwear that you hang to dry behind your apartment. There’s a man who wrote vulgar messages on my underwear this morning.”

“I feel unsafe because my husband is upcountry for work.”

An apartment mechanic has downloaded a video clip that is thought to have captured the creative writer and will be given to police to identify and arrest the intruder.