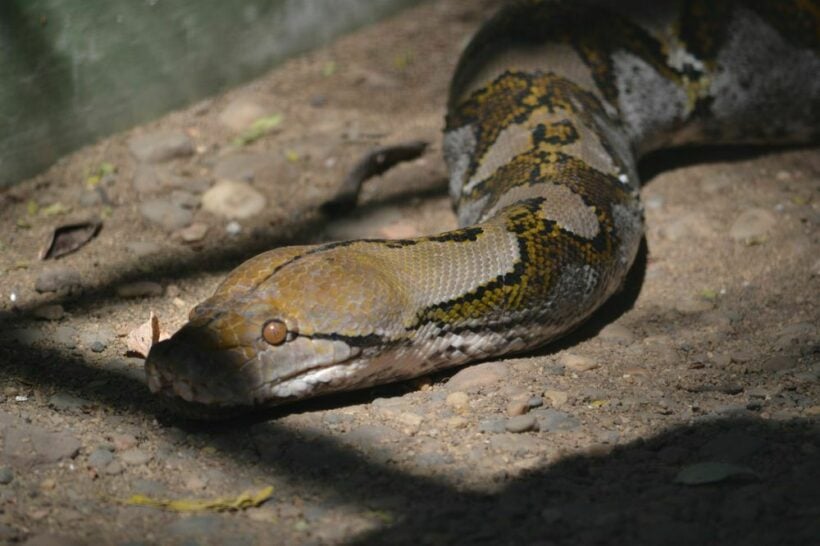 Rescue workers from the Kusoldharm Foundation branch in Patong, Phuket, say they have removed a 4 metre long reticulated python from a resort in Karon. The python was estimated to weigh around a whopping 20 kilograms.

Vinnie Modell, a rescue worker, told the Phuket News that his team was dispatched to the Novotel Phuket Karon Beach Resort & Spa, near Karon Circle, at about 11pm last night.

“It was a big old boy. It took all my strength to lift it. A beautiful 4 metre python weighing more than 20kg (approximately) was having a nap behind the building.”

With some help from fellow rescue workers, Modell says he soon held the python safely and they removed it from the resort.

“These are beautiful snakes, the orange colour of their eyes are stunning. Although they are non-venomous, I would not attempt to remove a snake of this size alone. One wrong move and I would be in life-threatening trouble.”

“The snake bites its prey with its rows of inverted teeth up to and including 52! Then it wraps its body around slowly suffocating its prey! Yes it could easily kill me. That’s why we ideally have a minimum of two more people to help deal with it.”

Modell also told The Phuket News that he disagreed with the Director of the Khao Phra Thaew Natural and Wildlife Education Centre, who announced last month that all snakes caught in homes would be taken off the island.

“King cobras should not be removed from their natural habitat. The king cobra is the predator snake of the snake world. They eat all the other snakes; monocled cobras and other snakes that do all the biting.”

“They do not attack people because they are just not interested in you. They know they can’t eat you, so they do not even want to waste the venom.”

“Removing king cobras from the wild allows the smaller problem snakes to get bigger, to grow until they become a problem.”