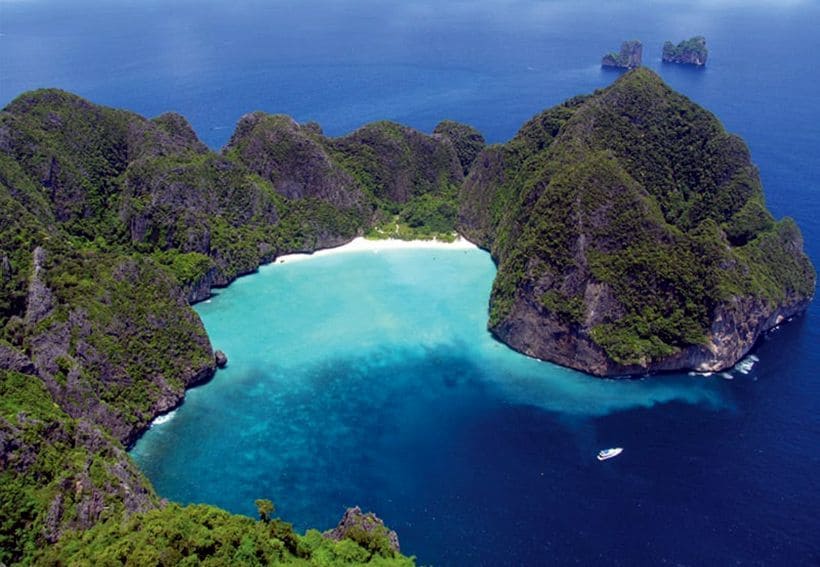 You can look but you can’t touch. Maya Bay’s beach, closed last year to allow coral restoration and beach recovery, is likely to remain closed to visitors for many years, even up to five.

The famous Koh Phi Phi Ley beach and bay, made famous in the 2000 movie The Beach, needs time for its ecology to fully recover years of tourist abuse, this according to the Phi Phi national park chief Vorapot Lomlim.

“Maya Bay must continue to be closed until nature has fully recovered. We expect it will take four to five years.”

Maya Bay was closed to tourist on June 1 last year. The Bay first became famous as part of the setting for the ‘The Beach’ starring Leonardo Di Caprio. That fame would lead to a surge in tourists and a rapacious local tourist industry that ramped up the numbers of tours to cater for the international popularity.

Maya Bay is located in the Phi Phi islands between Krabi and Phuket.

At its peak Maya Bay, the south’s most popular attraction, was receiving up to 5-6,000 tourists a day. Unwittingly, the tourists were trampling the beach and surrounding areas whilst the boats delivering them to the famous beach were throwing anchors over the side, destroying the natural coral.

Initially the national park chiefs closed off Maya Bay access for a period of three months  but it soon became apparent that the fragile bay was going to need a lot longer to recover. Officials reported that up to 50 percent of the Bay’s coral was dead.

In the meantime tourists can do a ‘drive by’ and take photos from outside the Bay. The area is cordoned off and kept under a close watch to protect the famous beach whilst plans continue to develop a sustainable tourist model and infrastructure for a new opening somewhere down the track.