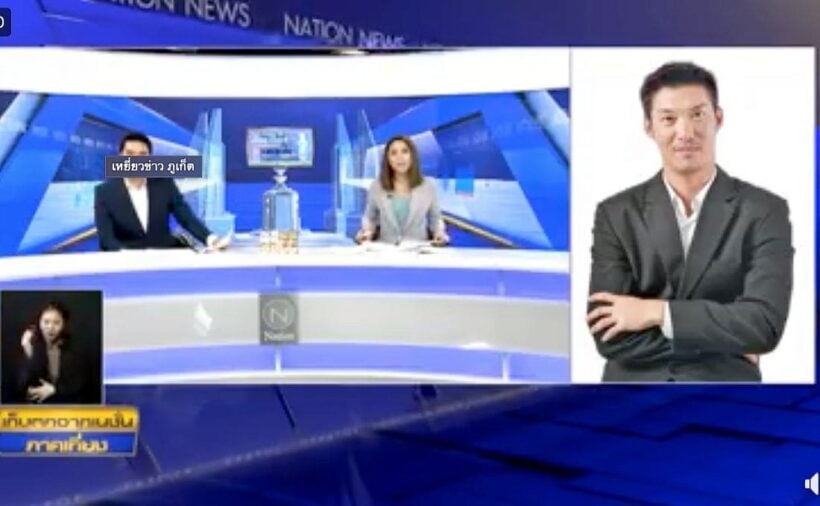 The Future Forward Party leader is demanding an apology from Nation TV for broadcasting an edited voice clip that makes it appear like a conversation between him and former Thai PM Thaksin Shinawatra.

“I am demanding Nation apologise to me and the people who heard this content,” he said when given a chance to respond on Nation TV yesterday.

Nation TV is in the hot seat after the audio clip was aired on one of its most popular news programs, hosted by its star anchor Kanok Ratwongsakul on Tuesday.

Nation TV then interviewed Thanathorn by phone on Wednesday in another program, where the Future Forward party leader confirmed that the clip was faked.

Thanathorn, campaigning in his first election with a progressive, pro-democracy platform, said on the program… ”The decision of Nation to air that clip showed the ethical standard of the Nation is on the decline.”

Most social media comments chastised the conservative Nation Channel 22 TV station saying the audio clip was “obviously fake”, made up as an edited voice montage of the two politicians speaking to different audiences on different occasions.

‘Stooping low’ said Thanathorn, in a telephone interview with another news program on Nation TV yesterday, and said he did not think “good” media outlets would broadcast such a clip.

“Good politics will never be possible without quality from the mass media.”

A station executive, however, stood firm about broadcasting the clip, claiming it was done in accordance with media ethics. He challenged Thanathorn to take legal action if he believed Nation TV had crossed the line.

Nation TV managing director Chatchai Pokogwai said the station was only doing its job, reporting what was happening and then offering Thanathorn a chance to give his side of the story. But the politician merely took the opportunity to reprimand the station harshly, he said.

A Thai-language hashtag that can be translated as “NationBusted” circulated online all day yesterday along with criticism of the media giant and its conservative anchor, Kanok.

The Thaksin camp has not reacted to the clip, but Thaksin Shinawatra’s son Panthongtae tweeted yesterday with a Thai hashtag that translates as ‘shame’ in English.

Thungyai wildlife chief could appeal for a heavier penalty for Premchai

Thaksin is in Hong Kong. Thailand wants to extradite him.