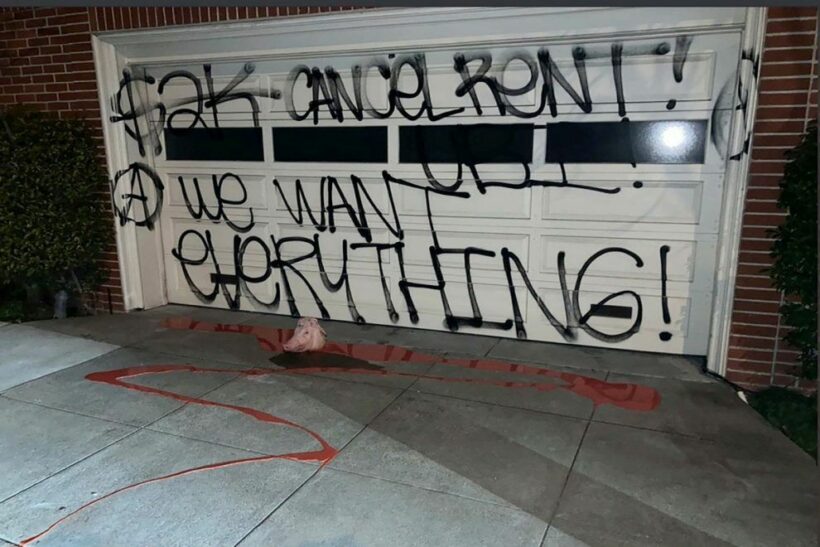 Vandals have targeted the homes of US politicians over a hotly-debated $900 billion pandemic relief aid package. Republican Senate leader Mitch McConnell and Democrat Speaker of the House Nancy Pelosi saw their homes littered with graffiti, fake blood and a pig’s head.

“Were’s [sic] my money” and “Mitch kills the poor” graced McConnell’s front door and window in Louisville, Kentucky, while a pig’s head and fake blood were left outside Pelosi’s San Fancisco home on January 2.

The Democrat-led House of Congress approved an increase in aid to Americans from $600 to $2,000 but the Republican-led Senate has not approved the increase despite President Trump’s advice to do so. McConnell told reporters on Wednesday that the Senate would not be bullied into rushing the aid.

“The Senate is not going to be bullied into rushing out more borrowed money into the hands of Democrats’ rich friends who don’t need the help.”

McConnell called the graffiti, which was reported at around 5am, a “radical tantrum.”

“Vandalism and the politics of fear have no place in our society.”

In San Fransisco, Pelosi’s garage door was sprayed with a crossed-out “$2K”, followed by “Cancel rent!” and “We want everything!”

The city’s special investigation unit says they are currently looking into the incidents.

The pandemic aid package is the 2nd to help Americans as the first package was dispersed by October of this year, however, many Americans didn’t receive the full amount promised and were told to wait until the 2021 tax season to appeal for the full amount that was promised.

Majority of Thais think economy will get worse – NIDA Poll