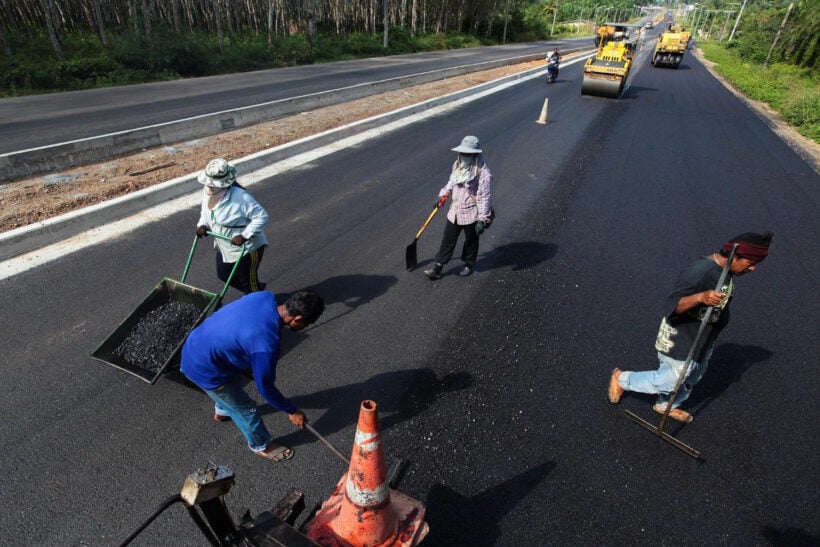 Thai PM Prayut Chan-o-cha chaired the signing ceremony of an agreement to use local Thai rubber in road construction, part of an effort to help the country’s financially strapped rubber farmers. Prayut praised the Ministry of Transport and the Ministry of Agriculture and Cooperatives as well as Prince of Songkhla University, the Thailand Institute of Scientific and Technological Research, the Rubber Plantation Cooperative Fund and the Engineering Institute of Thailand, under Royal Patronage.

A joint effort by the ministries and institutions has developed a rubber based paving method, which they say also increases the safety of roadways. The achievement is the result of government studies into road accidents and fatalities, and has the added benefit of helping the nation’s rubber growers.

The Economic Intelligence Center has predicted a gloomy outlook for rubber prices in Thailand this year due to tepid demand from China and increased domestic supply. The kingdom traditionally relies on Chinese consumption of its rubber, with 40% of exports destined for the world’s second largest economy, largely to make automobile tyres.

The Ministry of Transport has also announced plans to cover concrete road barricades with rubber. The method has been certified by the Institute of Scientific and Technological Research and was tested in South Korea, proving effective at reducing the adverse effects of traffic incidents. The covering process will take place from 2020 to 2022, encompassing 12,282 kilometres of road, utilising 1,063,651 rubber trees or about 1 million tonnes of rubber sap, accounting for 71% of growers’ income, or just over 30 billion baht.

The Rubber Authority of Thailand began to buy fresh resin instead of rubber in 2019. Rubber traders supply the fresh resin, bought by the RAOT, to local administrative organisations for use in road construction. The RAOT has calculated that about 13 tonnes of resin can make a kilometre of road. If the resin is bought for 46 baht per kilogram, a rubber planter will earn nearly 200,000 baht per kilometre. The Department of Highways says the surface of roads made of a mixture of resin and parasoil cement is more resilient and durable in hot weather than the surface of road made of asphalt and cement, and provides better traction.