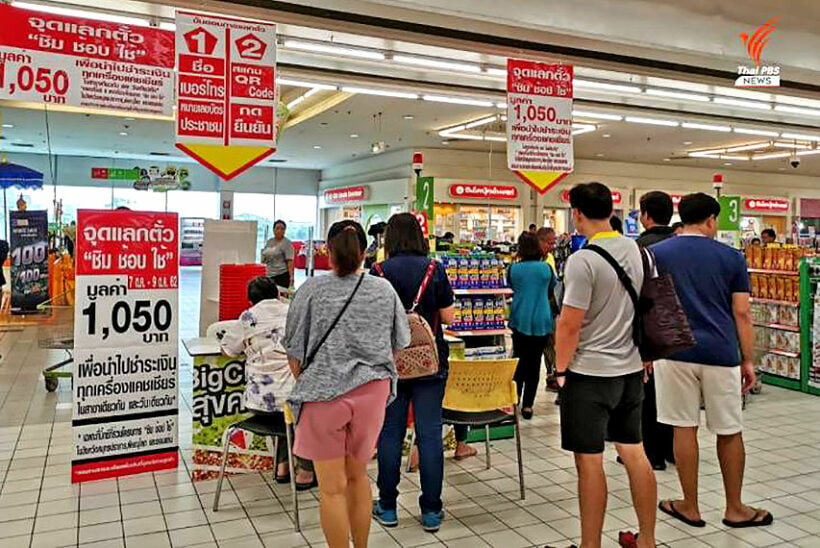 Deputy PM Somkid Jatusripitak is praising the Chim Shop Chai (Eat Shop Spend) scheme and has told the Finance Ministry to consider launching a third round before the end of the year.

In a policy speech, he defended the scheme, saying it’s neither wasteful nor a populist policy, fending off accusations by critics. He insists the program has been successful in promoting domestic tourism, encouraging locals to travel and spend. He says it was never intended to benefit big business.

Somkid says he’d like the Finance Ministry to assess the results of the first and second rounds and consider launching a third round.

Finance Minister Uttama Savanayana says he’ll need no more than a month to make adjustments to the scheme before seeking Cabinet approval. He says that without the program, Thailand’s growth might be less than the government’s 2.8% forecast – a forecast whittled down over the year from an earlier projection of 4.5% GDP growth in 2019.

Uttama says he’s told the Revenue Department to reassure businesses that the government won’t be auditing them or demanding higher taxes, and will add accident and health insurance for welfare card holders to improve the lives of low income earners.

The welfare card scheme costs taxpayers about 50 billion baht a year. To be eligible for the insurance, around 14.5 million card holders must re-register under the new regulations.

Bangkok’s BTS skytrain maximum fare rate is being raised to 158 baht despite receiving backlash over the hike. The Transport Ministry is behind the calls for City Hall to stop the increase as it says it is too expensive for the average commuter who takes the BTS 2 times a day. Saksayam Chidchob, the Transport Minister, says other routes should be explored before increasing the costs for commuters.

“The Bangkok Metropolitan Administration should halt its policy on new BTS maximum fare and wait for other authorities to find proper solutions.”

The BMA and Transport Ministry were jointly appointed to set the fare’s ceiling in 2018, but it appears the BMA is now taking control of the new price hike. The BMA and Interior Ministry were previously responsible for granting concessions for the skytrain’s operation but the Transport Ministry is also part of the reviewing committee for extending the concessions and overall investments in the country’s mass transit system.

Before the new hike in fares, it previously extended concessions to the current Bangkok Mass Transit System in order to keep the fare ceiling at 65 baht. Now, making a new deal that would see passengers paying more than double in total fares across the skytrain system is being seen as pushing the envelope.

What is not clear is why the fares are being hiked when the country is suffering economically due to the Covid-19 pandemic. Even though the new maximum is set to rollout on February 16, Bangkok’s governor has offered to bring the new maximum down to 104 for a short period of time in consideration of the recent Covid outbreak.

But even increasing the fare to 104 baht is being widely opposed. The secretary-general of the Association for the Protection of the Thai Constitution says even the discounted rate is too expensive for daily commuters. And, the date for the discount ending has not been announced.

The Finance Ministery is considering adding another registration round to the Khon La Khrueng (“Let’s Go Halves”) co-payment scheme, as 1.34 million rights have not yet been taken up. The government introduced the scheme last October, in an effort to stimulate the Covid-battered economy. Under the scheme, Thai citizens get a 50% subsidy on the purchase of food, drink and general products, up to 150 baht per person per day, to a maximum of 3,000 baht for the duration of the scheme. Those who sign up need to make purchases within 14 days of their registration.

The first phase got under way on October 23 and finished on December 31, with the government setting aside 30 billion baht to cover 10 million people. The second phase began on January 1 and runs until March 31, covering an additional 5 million people. The cap has also been raised from 3,000 to 3,500 baht.

Kulaya Tantitemit from the Fiscal Policy Office says that of the combined 15 million rights, 13.66 have been taken up. The Bangkok Post reports that those who have not received subsidy rights can register for the 1.34 million that remain by the end of this month.

The Finance Ministry is also considering a third phase of the scheme, based on the success of the first 2 phases, according to Minister Arkhom Termpittayapaisith.