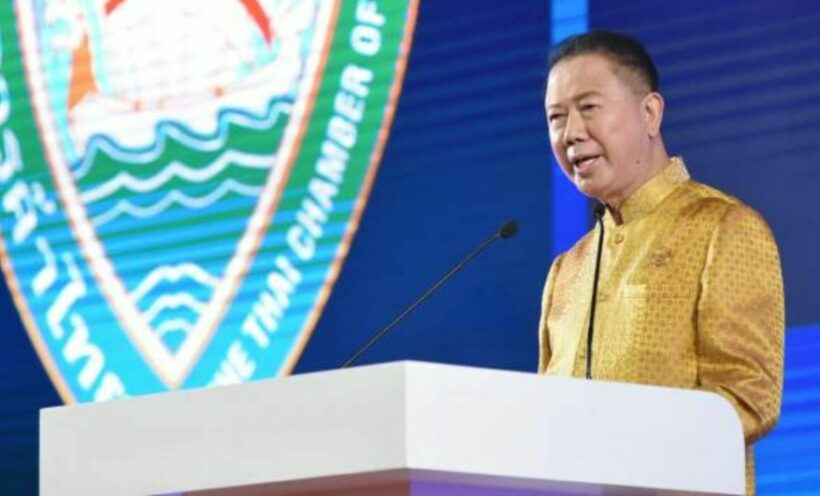 PHOTO: The Thai Chamber of Commerce is proposing measures to boost the economy. (via Thai PBS)

Ahead of a meeting with PM Prayut Chan-o-cha tomorrow, the Thai Chamber of Commerce has compiled a list of measures to boost Thailand’s struggling economy. The proposal was sourced from 5 regional chambers of commerce and will be submitted to the prime minister tomorrow as part of his meetings with private sector representatives.

The proposed measures aren’t particularly groundbreaking, mostly suggesting extending current stimulus projects and encouraging the same suggestions as made in the past. They call for an extension on the popular 50:50 program that co-pays for food and groceries, as well as the “shop dee mee kuen” program that translates to “the more you spend, the more you save”.

The proposal stresses vaccinating everyone in the country as quickly as possible, a plan that the Minister of Energy Supattanapong Punmeechaow vowed to support at the meeting, adding that they hope to achieve close to a 100% vaccination rate by the end of the year. He also assured that the overwhelming of hospitals would not happen again in the future as the government is actively procuring new Covid-19 medicines like Paxlovid and Molnupiravir.

Another main point of the proposed measures was offering relief for household debt and providing assistance for small and medium-sized enterprises. The president of the Thai Chamber of Commerce said he expects the proposed measures to help speed the recovery of the economy when the government implements them.

He cautions though that we should expect some inflation and rising costs for products and production costs due to oil prices going up. He urged the government to take easing action on public transport and the cost of living in general. The government has been working to lower energy costs domestically as well as reduce non-tariff barriers that make Thailand more competitive globally. They are also once again attempting to stimulate the economy by luring in one million foreigners bringing their expertise and investment money.

JohninDublin
Interesting to see that part about the new drug treatments for Covid are high on the list of priorities. Not sure exactly what they do. Are they alternatives to vaxxing, or treatments for the infected? Either way, thinking of that…

Dedinbed
1 hour ago, Thaiger said: The proposed measures aren’t particularly groundbreaking, mostly suggesting extending current stimulus projects and encouraging the same suggestions as made in the past. Bit like rearranging the deck chairs on the Titanic then ..

palooka
This report had me sucked in, until the last sentence. They are also once again attempting to stimulate the economy by luring in one million foreigners bringing their expertise and investment money.
Fanta
The anti vaxxers will have the same attitude to the new meds as they have to the new vaccines. Doubt it until they need it then they’ll demand it. imo, my brother summed it up nicely when he said he’s…

JohninDublin
25 minutes ago, palooka said: This report had me sucked in, until the last sentence. They are also once again attempting to stimulate the economy by luring in one million foreigners bringing their expertise and investment money. The bit about…