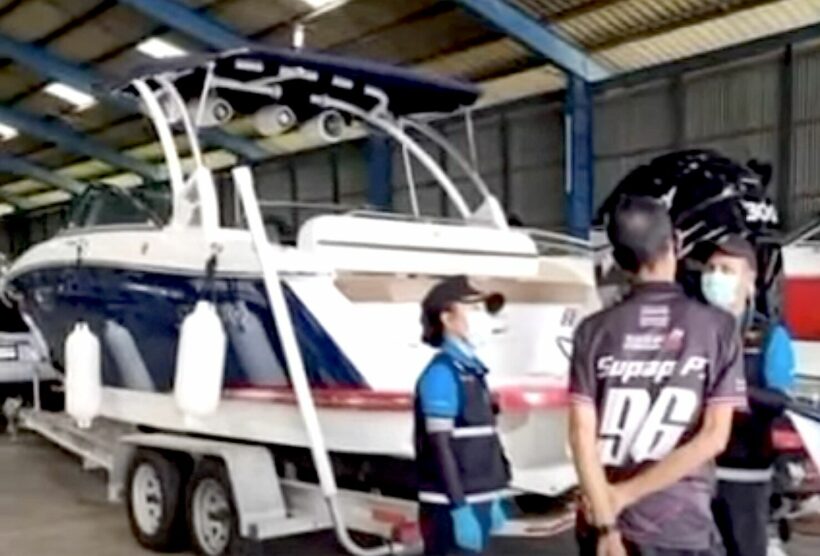 Investigating police stand in front of the speedboat parked at the NBC Boat Club in Nonthaburi. The vessel was later transported to provincial police headquarters, where it was left exposed to the weather. Credit: Online Reporters

Store the boat properly, you dummies! That’s the key takeaway, after senators visited the police headquarters in Muang district of Nonthaburi last week, where they found police had not been properly storing a key piece of evidence — the speedboat that drowned actress Nida “Tangmo” Patcharavirapong allegedly fell from.

Members of the Senate committee on human rights, liberty and consumer protection visited the Nonthaburi police headquarters on Thursday. They examined the speedboat that Tangmo was reportedly riding on when she fell into the Chao Phraya River and drowned on the night of February 24.

The vessel was found parked outside the Nonthaburi police headquarters, sectioned off with police barriers, where it sat exposed to the sun, wind and rain. 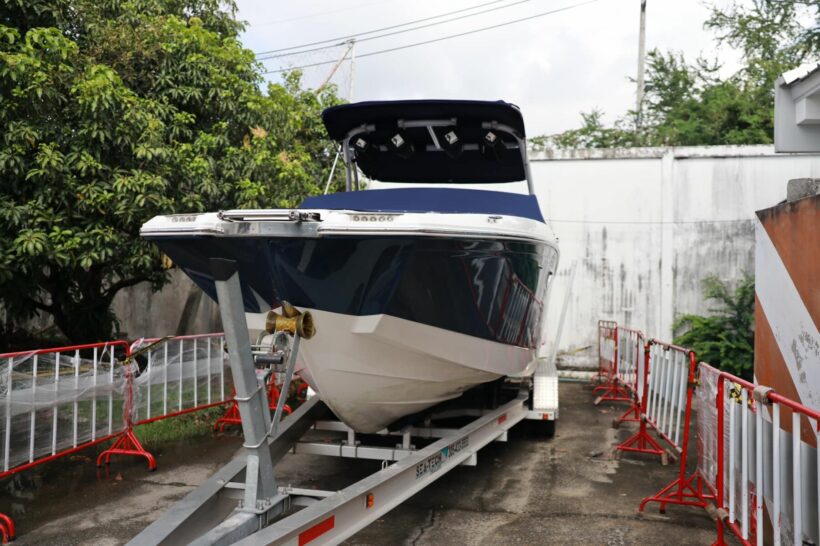 The senators spent around two hours with the chief of Muang Nonthaburi police. They warned police investigators of the need to properly store the speedboat in order to preserve forensic evidence, while the Tangmo case remains open. In short, they pointed out the obvious and used common sense.

“In principle, material evidence must be kept away from damage and contamination, which could have an effect on cases in court.”

She said the speedboat is integral to the case and should therefore be stored more properly. Merely sectioning it off did not offer sufficient protection for existing forensic evidence, which could be corrupted by the weather. 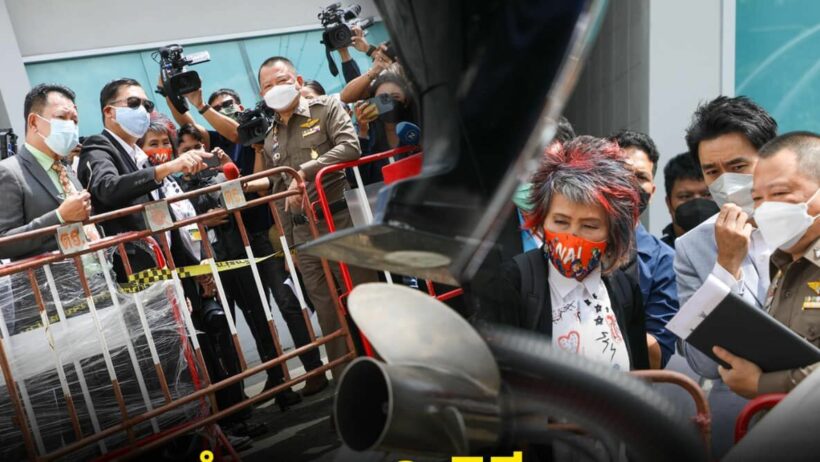 Speaking to media after the visit, committee chairman Somchai Sawangkarn said the senate committee asked police to move the boat to a garage or completely covered it up in order to preserve forensic evidence on the boat.

He said the committee also recommended police seek information from boating experts to better understand the causes of people falling overboard and the type of injuries they tend to suffer.

Meanwhile, Dr. Pornthip (pictured above with red hair) said she had not determined an explanation for a “fishbone” shaped wound found on Tangmo’s thigh.

Later, in a post on her Facebook page, the forensics expert reflected on her visit to the provincial police headquarters earlier that day. A Buddhist, she lamented the lack of reform in Thailand’s police force, which she claims is hindering the investigation process and delaying justice, saying…

“Thailand has to wait for the law of karma. Karma follows the law. Both the doers and those who do not act. There is not much time left for this government. How much percentage of hope do you have?”

The late TV actress, 37, was with five other people, including the boat owner Tanupat “Por” Lerttaweewit, when she reportedly fell from the speedboat on a Thursday night last month. Por has been charged with negligence leading to the actress’ death, along with his buddy, the unlicensed skipper “Robert.”

Police investigators told the committee that they intended to bring the case to a close next month. Until then, the investigation continues.

Soidog
How embarrassing. Maybe they should also tell them to flush the loo and wash their hands.

Noble_Design
And why must this particular case be given so much attentions? Because the victim is a movie star? How about the oil tanker that recently exploded at the Chao Phraya river that killed 1 person? Should that tanker be stored…

Thommo
Just say something to show how important they are 🤒

Transam
39 minutes ago, Noble_Design said: And why must this particular case be given so much attentions? Because the victim is a movie star? How about the oil tanker that recently exploded at the Chao Phraya river that killed 1 person?…

TheDirtyDurian
Just when you thought there hadn't been a watermelon story for a while ....