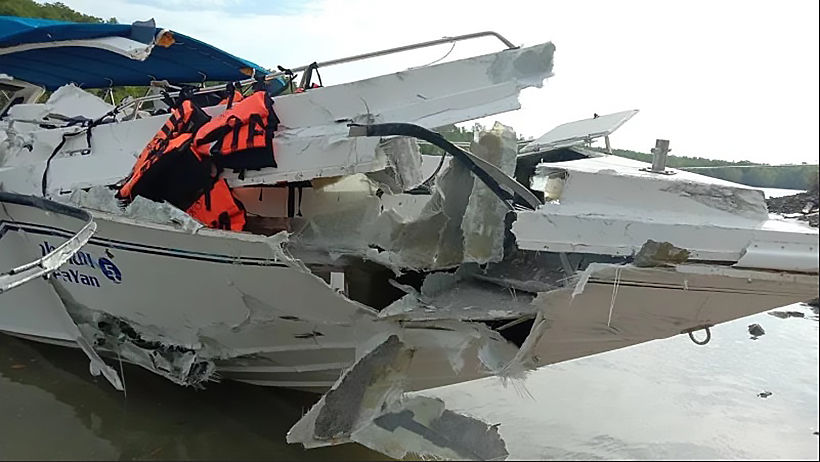 PHOTO: One of the boats damaged in Mondays fatal collision - Eakkapop Thongtub, The Phuket News

An official of the Phuket Provincial Court confirmed this morning that both captains involved in the speedboat collision on Monday that killed two Russian children and injured more than a dozen others were released yesterday on bail of 150,000 each. Both were charged Monday with “recklessness causing death and injury.” 24 year old Atsarawut Suden and 33 year old Anusorn Duangkiet must present themselves to the court in seven days. Phuket City’s police chief told reporters that police had requested that the court deny bail.

The collision, between tour speedboats “ALP 111” and  “Payan 5,” occurred in the channel linking Phuket Boat Lagoon and Royal Phuket Marina to Phang Nga Bay, at about 8am on Monday. The Payan 5, operated by Seastar Tour, was on the way from Laem Nga in Rassada to pick up tourists at Royal Phuket Marina when the incident happened.

As the Payan 5 was turning into the access channel to arrive at Royal Phuket Marina, it was struck by the “ALP 111”, operated by Andaman Leisure Phuket.

The ALP 111, driven by Atsarawut, had 35 passengers on board, all Russian, who had boarded the boat at Boat Lagoon Pier, further inside the channel. 12 year old Russian boy Lysxi Iaroslav, and 9 year old girl Lysaia Mirasalavr, were killed in the collision, and 19 of the remaining tourists were rushed to hospital.

All but 52 year old Tatiana Erhova, and 29 year old Azamat Isinalinov received treatement and were discharged from hospital care. Erhova on Monday was listed as admitted at Bangkok Hospital Phuket, but no updates on her condition have been issued. Isinalinov, who suffered head injuries that required 40 stitches, was listed as under observation at Phuket’s Bangkok Hospital,but no updates on his condition have been forthcoming either.

Marine Department Chief Witthaya Yamuang in Phuket said on Monday that he had ordered both captains banned from driving any boat for two years.