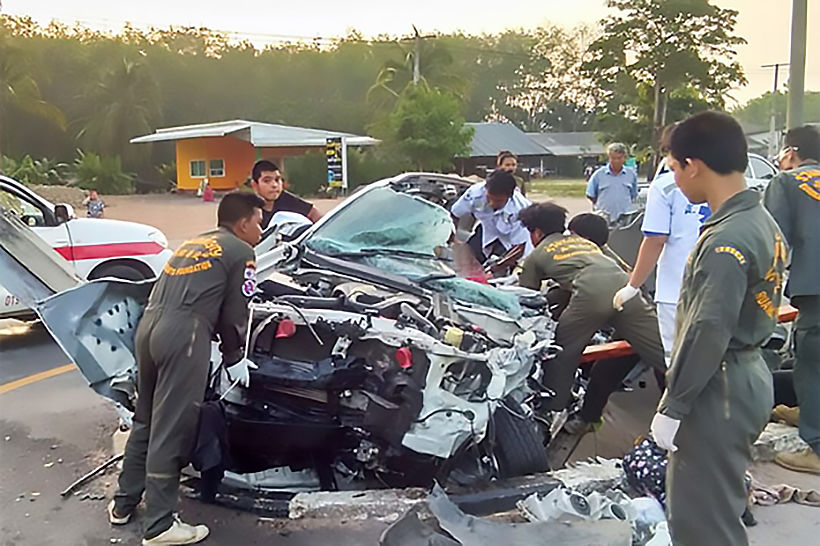 PHOTO: Rescue workers retrieve the victims from the wreckage of a 2018 Songkran road incident - Bangkok Post

With Songkran and its infamous “7 dangerous days” rapidly approaching, the Interior Ministry has asked local authorities and administrations for effective measures to prevent road incidents. Last year, 386 people were killed on Thai roads during the deadly week .

Road incidents kill some 22,000 in Thailand every year, or about 65 deaths a day. But the Songkran festival’s “7 dangerous days” is a big part of the total.

“The high toll is largely caused by drunk driving and lack of safety precautions. Thailand has 500,000 kilometres of roads, but 400,000 are in rural areas. So I want more cooperation from local administrations in overseeing local roads, above all barring users who violate traffic laws. This could help cut the death toll significantly. Especially during festivals like Songkran when people celebrate by drinking.”

During Songkran last year the proportion of road accidents caused by drunk driving came in at 36.6%, followed by speeding at 28.3%. In 2018, when 418 died during Songkran, speeding was the primary cause (27.7%).

There are two periods each year when local media concentrate their attention on the number of road casualties: “Western” New Year, and Songkran, the Thai New Year. Both are prolonged holidays when the government makes sure everyone gets at least 5 days off, so that people can make family visits to their homes in rural areas.