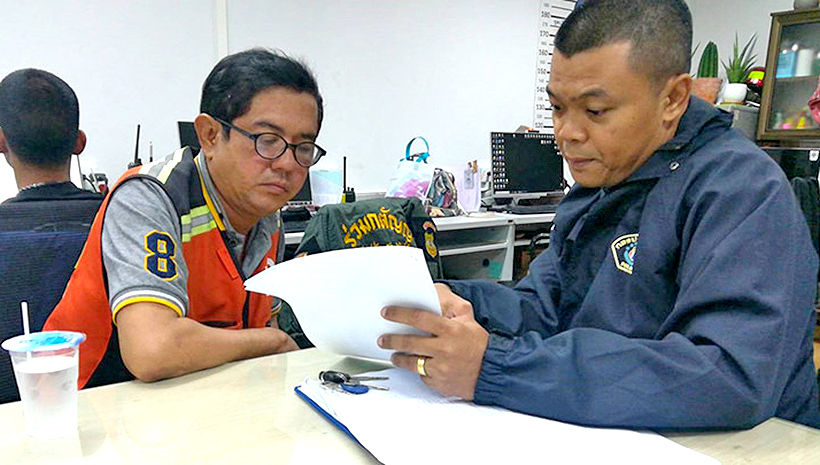 “He told police that he had four wives that he needed to take care of.”

A fake 49 year old messenger has been arrested after making millions by double charging customers with the same bill. He told police he did it because he has 4 wives and he needs a lot of money to take care of them. The Crime Suppression Division Police worked with the local Police in Pathum Thani, north of Bangkok, and successfully arrested Tanongsak Ruengsiri, a local ‘win’ motorbike driver.

Tanongsak was arrested for document forgery and fraud. He was arrested in front of a Mini Big C branch in Rattanakosin, 30 minutes from Don Mueang Airport.

Tanongsak had worked as a messenger for a metal company for about 10 years. Throughout the years he gained their trust and was responsible for collecting payments from customers. But, according to police, he abused the trust by making 2 photocopies of the receipts. When collecting the money, he would double charge the clients and keep the money from the additional receipt.

According to evidence from printed receipts, his additional earnings amounted to 500,000 baht, but the final damages, including charges with no receipts of proof, is estimated to be 1 to 2 million baht.

According to ThaiResidents.com, the company realised what Tanongsak was doing when one day he went to collect a bill from a customer but the actual customer wasn’t there, instead a relative was at the shop. When the relative saw the bill he said he needed to call the customer to confirm before making the payment. But Tanongsak had already collected the payment from the customer. The customer then called the metal company and asked them why are they trying to double charge him.

The company started an investigation and discovered Tanonsak’s scam. They filed a report leading to the arrest.

Tanongsak admitted to his deceit at the time of the arrest. He told police that he had four wives that he needed to take care of.

According to police, his newest wife asked him for some money to invest in a beauty salon shop that didn’t work out. This is when he had to get an extra job as a Win motorbike driver.