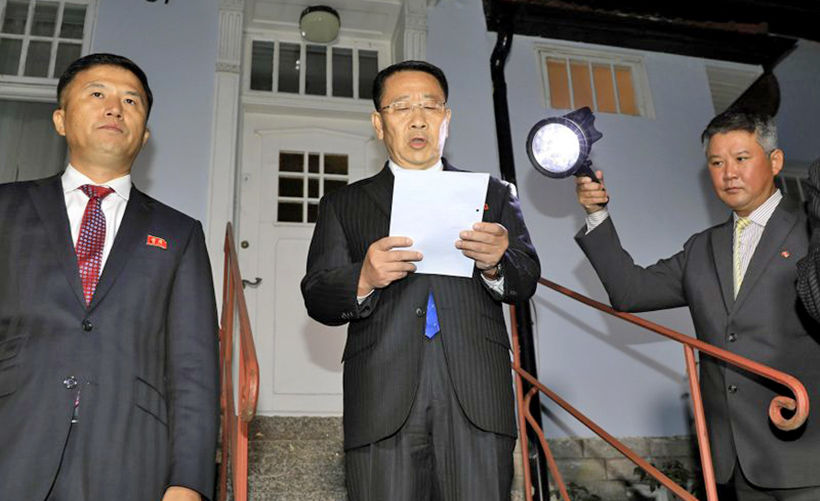 PHOTO: It’s good to come to talks prepared with your very own note light and human lightstand – AP

North Korea says it has “no intention” to continue nuclear talks unless the US takes steps to “end hostilities”… this just a day after negotiations broke down in Sweden.

The discussions in Sweden followed months of stalemate following a February meeting between the North’s leader Kim Jong Un and US President Donald Trump, following Pyongyang’s defiant test of a sea-launched ballistic missile last week. The North walked away from the Sweden talks saying it was disappointed at the lack of “new and creative” solutions offered by Washington, although the US insisted it was willing to meet again in two weeks.

But a spokesman at the North’s foreign ministry said Washington’s claims about another meeting was “ungrounded”.

“We have no intention to hold such sickening negotiations as what happened this time before the US takes a substantial step to make complete and irreversible withdrawal of the hostile policy toward the DPRK (North Korea).”

“The fate of the future DPRK-US dialogue depends on the US attitude, and the end of this year is its deadline.”

In Stockholm, the nuclear-armed North’s leading negotiator, Kim Myong Gil, blamed the US for not giving up their “old attitude” which led to talks ending “without any outcome”. But Washington called the talks “good discussions”, saying the comments by North Korea did not reflect the content or the spirit their eight-and-a-half-hour discussion.

The US accepted host Sweden’s invitation to resume talks in two weeks’ time, State Department spokeswoman Morgan Ortagus said. Ortagus added in a statement that the US “previewed a number of new initiatives” that would allow progress on the statement reached in Singapore at the first Trump-Kim summit last year.

The two leaders adopted a vaguely worded document on the “complete denuclearisation of the Korean peninsula” at their first summit in June last year, but little progress has since been made.

On Wednesday, North Korea claimed to have entered a new phase in its defence capability with Wednesday’s test of a submarine-launched ballistic missile – the most provocative since Pyongyang began dialogue with Washington in 2018.