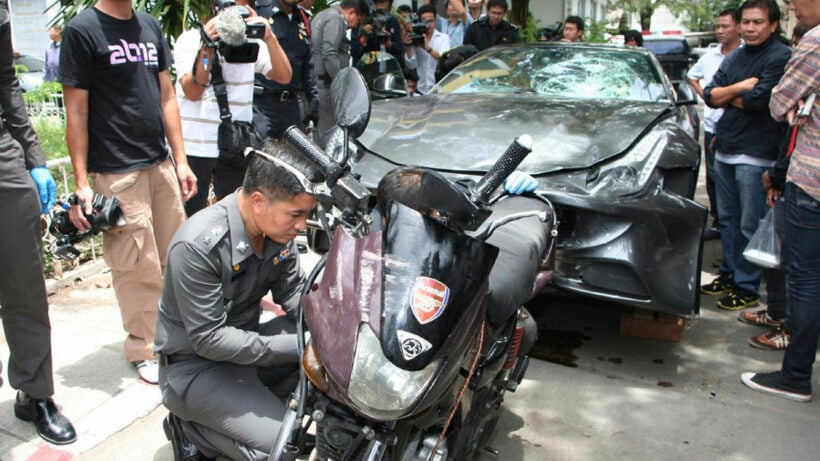 PHOTO: Investigations and collection of forensic evidence in the morning after the fatal incident in 2012

In a carefully staged leaking of a document, the alleged “new evidence” has now been revealed which the Office of Special Prosecutors for Criminal Litigation claims was behind the dropping of the charges against Vorayuth “Boss” Yoovidhya in a fatal road death in Bangkok in 2012. Meanwhile, the Thai PM has demanded an investigation into the dropping of charges and ordered a fact-finding panel to investigate the decision to drop charges against the Red Bull heir.

A “specialist” and witnesses who were driving cars in the area at the time of the incident, had made statements that Vorayuth “Boss” Yoovidhya did not drive his Ferrari over the speed limit (he was estimated to be driving 177 kph at the time) and that the policeman “abruptly cut in front of his vehicle” are cited to be among the main reasons convincing prosecutors to drop charges against Boss.

Nate Naksuk, chief justice of the Department of Appealate Litigation, and acting attorney-general, signed the order to drop the charge of reckless driving causing death.

The document outlining some of the latest “evidence” to emerge in the cases, was given as the major reason prosecutors decided to drop the remaining charges of reckless driving causing death. The Office of the Attorney General claims that the new witnesses’ evidence was given “more weight” than previous evidence collected at the time and at the scene, including forensic evidence. The incident happened on September 3, 2012, nearly 8 years ago. The statute of limitations gave the charge of reckless driving causing death another 7 years to prosecute.

But the newly leaked documents claim that new “specialist witnesses”, senior police, inspections of the damage to the Ferrari and the victim’s motorcycle, compared it to other accidents, and agreed Boss’ sportscar could not have been travelling at 170 kmh at the at the time of the crash “and was not exceeding 80 kmh”.

A university engineering lecturer was also brought in to calculate the speed of both vehicles involved in the crash in 2012. He documented that Boss’ Ferrari was “likely travelling at 76.175 kmh”.

Just 8 months ago, 2 other witnesses were interviewed who told investigators they were driving behind the Ferrari just before the accident happened. They claimed that the victim (policeman) was travelling at no more than 20 kmh while Boss was driving between 50-60 kmh.

The Bangkok Post quotes parts of the leaked documents saying, prior to the crash, the victim’s motorcycle, which was in the far-left lane, abruptly changed lanes.

“One of the witnesses who was driving a pickup truck at the middle lane had to brake and managed to swerve to the left to avoid hitting the motorcycle. According to his statement, the motorcycle then changed lanes and cut in front of the Ferrari in the far-right lane, causing the Ferrari to crash into the motorcycle.”

So prosecutors surmised that the crash was a “force majeure” (unforeseeable circumstances) and that “the victim’s reckless driving contributed to the crash”. Their current position reverses the prosecutors’s earlier decision to indict Boss over the incident in 2012. 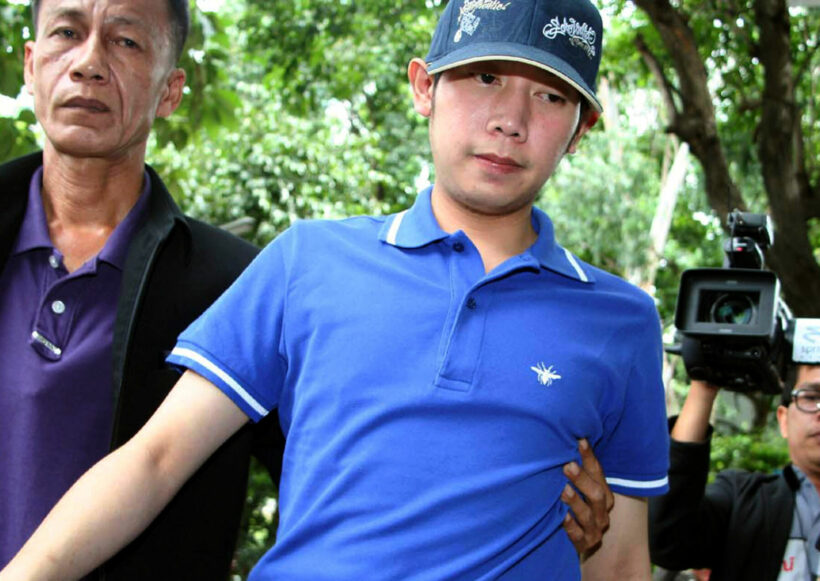