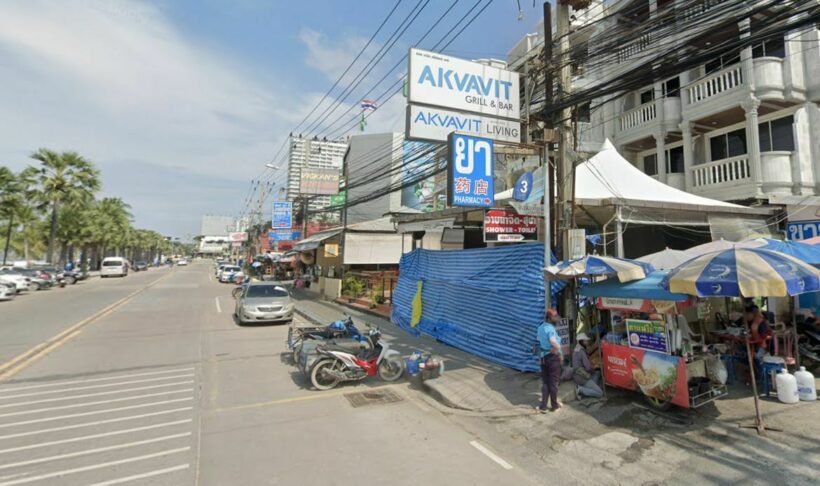 Gunshots rang out in the normally peaceful streets running along Jomtien Beach, frightening people in the neighbourhood but not injuring anybody. The incident took place early yesterday morning when an as-yet-unidentified man fired several shots in public along the beach road.

The man is said to have fired off several rounds of gunshots from inside his car around 2:30 am at the entrance of Soi 3 Jomtien Beach. The incident took place a mere few hundred metres from the Pattaya City Police Box on Dongtan, which had just converted into a 24-hour local station, so police were on duty at the time.

Witnesses told Pattaya police that they were frightened by the gunshots and have no idea why it would happen. One couple said they were out looking for street food carts for some late night dinner and were 200 metres from the previously mentioned Jomtien police box when they heard gunshots and saw someone firing their gun out of their car window.

It was unclear if the shooter had any particular target or victim in mind and the couple said they were shocked and didn’t have any bad blood with anybody that they could think of. They said that they could not identify the make or model of the car and did not get a look at the driver.

A local Jomtien motorbike taxi speaking anonymously said that he heard the gunshots though it did not witness what happened. He specified that he clearly knows the difference between the sound of gunfire and other sorts of bangs such as an exhaust pipe or a car backfiring. No other witnesses with any more information have come forward as of now.

CCTV footage in the area surrounding the incident will now be checked and analyzed for any information or any clear pictures of the driver or his car in hopes of identifying a suspect and taking him into custody. While there were no injuries reported from the gunshots, Pattaya police in Jomtien vow a thorough investigation for the sake of the area’s reputation.

They fear the threat of potential violence suggested by gunshots like this could tarnish the relatively positive and safe image of Pattaya and Jomtien Beach to the public and to tourists both domestically and internationally. An investigation is ongoing and it was unclear if the police had collected any evidence including spent bullet casings.

AussieBob
Probably warning shots - someone inside there has annoyed the wrong people.