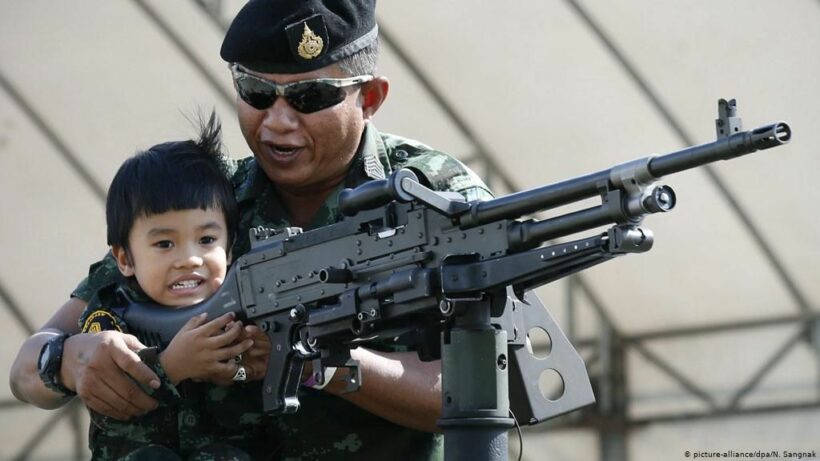 The country’s rise in firearm violence has the Bangkok Post describing the problem as “Thailand’s other pandemic.” More than half of crimes in Thailand involve firearms according to statistics. In many reports, people lose their temper, even over petty comments, and turn to a gun to solve the problem.

Last week, a man shot and killed 3 of his coworkers at a radio station after what seems to be relatively minor, negative comments over things like one coworker telling him not to smoke (according to the shooter). A man shot and killed a monk after the monk criticised his drinking habits last month. And just over the weekend, a man shot and injured his friend who had been having an affair with the man’s wife. The Bangkok Post story claims 60% of crimes in Thailand involve firearms.

Discussion on stricter gun laws were prompted after two mass shooting incidents earlier this year: February’s Terminal 21 shooting in Korat where a Thai army soldier killed 29 people and injured 57 people, and January’s shooting at a Lop Buri gold shop where 3 people, including a young boy, were killed. A ‘bored’ school director was later arrested and confessed to the crime.

But discussion on the topic has died down again according to Rajabhat University criminologist associate professor Piyaporn Tunneekul.

“Thailand’s gun laws are outdated. Currently, a person as young as 20 years old can own a gun and have a lifelong gun license. There are loopholes in the system of registering, buying and selling guns.”

“The concept of owning a gun for a Thai in the past was for the purpose of protection. Now that mindset has changed.”

“Today people believe ownership of guns conveys a sense of wielding power. A firearm is also a sign of authority and control, a sign you are not afraid of anything.”

Tunneekul suggests Thailand follow Japan’s laws on gun ownership, such as raising the age to own a gun to 25 years old and requiring that gun licenses be renewed every 3 years. She also suggests capping the amount of ammunition that can be sold and banning certain types of guns that are typically used in crimes.

“Japan is stringent in the types of guns one is allowed to own. And for a good reason.”