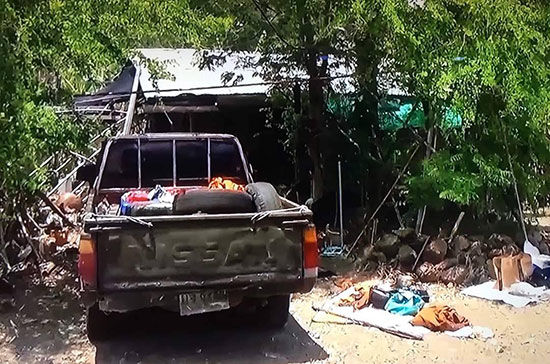 A Buddhist monk was killed last week after he spoke up about a man’s drinking habits. Villagers in Lampang found the body of 69 year old Phra Bundhit Prom-iam over the weekend in his pick-up truck. His body was decaying and “gave off a strong smell”.

As police investigated the incident, evidence led them to 44 year old Sakol Pumthong who eventually admitted to shooting the monk. There was a re-enactment at the crime scene yesterday.

Pumthong’s wife had allegedly kicked him out of the house because of his drinking habits. He moved into a hut with the monk where he stayed for 10 days. The monk gave him food and water, but was stern with Pumthong about his excessive drinking habit.

In a fit of anger, Pumthong told police he took a rifle from the monk’s hut and waited for the monk to return to the area. As the monk came back to the pick-up truck, Pumthong fired the gun through the side window, striking the monk in the head.