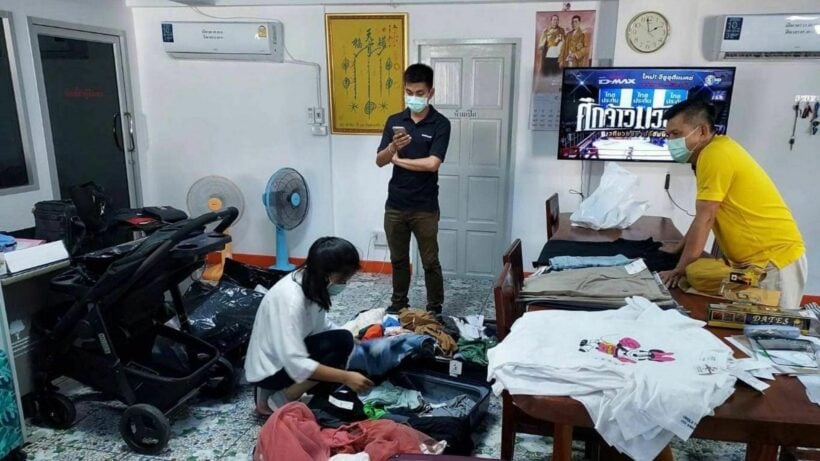 Popular Japanese clothing brand, Uniqlo at Gateway shopping centre in Bangsue has been robbed by a gang of Vietnamese thieves, 1 male and 3 females, who allegedly stole 19 polo shirts and 62 long sleeve shirts valued at 64,000 baht. Police told reporters the theft wasn’t the gang’s first time as it happened in 5 department stores between April 17 to April 22. The group confessed that they were to sell the items back in Vietnam

They were caught onCTV using large suitcases and baby strollers to pack their stolen clothes, and they also were caught wearing some of the stolen items too. The group eventually escaped on a Tuk Tuk around the Bang Pho intersection.

Police officers tracked them down and found them living in an apartment in the Petchburi area in Bangkok. Management working at the apartment took police to the room where the ‘gang’ were staying. Police found the thieves with a bunch of stolen items from Uniqlo along with large suitcases.

It all started at Uniqlo Central Bangna on April 17 when they stole around 300,000 worth of clothes. Two days later on April 19, they went to Uniqlo at Big C Rama 4 and stole a total of 5,200 baht. Later on the same day, they went to yet another Uniqlo branch at Samyan Mitrtown and stole another 5,400 baht. Before visiting their final destination at Gateway Bangsue, they were at Central Pattaya Beach stealing 80,000 worth of Uniqlo clothing.

Looks like there is a shortage in Uniqlo clothing in Vietnam, or they really love the brand and will pay a premium price there.