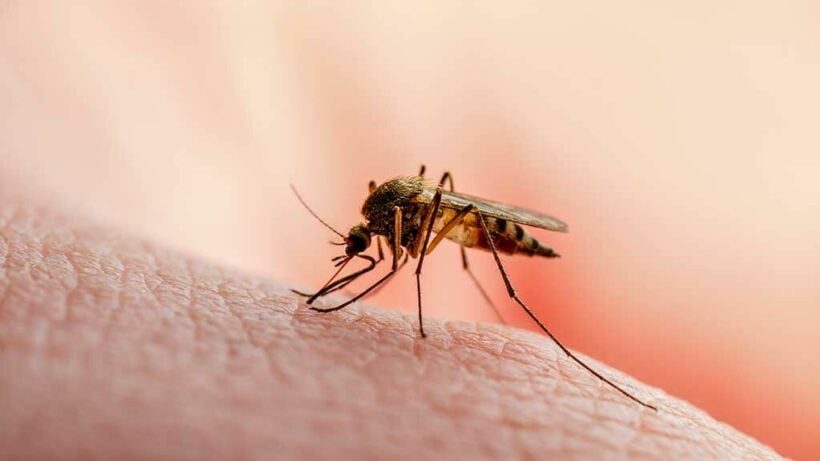 Cases of malaria in Thailand have decreased 72% in recent years, but the country’s Department of Disease Control is planning to completely eradicate the mosquito-borne disease by 2024. Today, the DDC is observing World Malaria Day 2022 under the theme “Harness innovation to reduce the malaria disease burden and save lives”. A malaria vaccine is also under evaluation and is planned to undergo clinical trials in Thailand in the future.

Cases of malaria in Thailand usually occur in mountainous or forested areas, especially along the Thai – Myanmar and Thai – Cambodian borders. There is very little risk of transmission in urban areas such as Bangkok, Chiang Mai, Pattaya, Phuket, etc. Only certain species of mosquitoes can spread malaria, which is spread in Thailand through female Anopheles mosquito bites. Malaria is caused by protozoa and can be fatal.

Symptoms of malaria include fever, chills, headache, muscle pain, loss of appetite, nausea, vomiting, diarrhea and yellowing of the skin.

If you travel to a rural area where there is a risk of malaria, the best prevention is to prevent mosquito bites by using mosquito repellent and sleeping inside a mosquito net. The drug Chemoprophylaxis, which can cause unpleasant side effects, is not recommended in Thailand where malaria is multi-drug resistant.

HERE is an article about avoiding another mosquito-borne disease, Dengue, with some clues about preventing bites.

People who are repeatedly exposed to malaria can acquire immunity to the parasitic disease, opening up the opportunity for a malaria vaccine to be developed. However, the complexity of the malaria parasite has made developing a vaccine a challenge.

Mosquirix is the world’s first WHO-approved vaccine against malaria caused by the plasmodium falciparum parasite. The vaccine is based on a protein expressed on the surface of the sporozoite, called the circumsporozoite protein. The vaccine is under evaluation in Ghana, Kenya and Malawi, with ongoing studies suggesting the vaccine is reducing deadly malaria cases by at least 30%.

Scientists in India have completed the first-ever Phase 1 clinical trials using the vaccine, which were considered to be successful. A Phase 2a trial is being planned at Oxford University and another is planned to take place in Thailand.

Last July, BioNTech, manufacturer of the Pfizer-BioNTech Covid-19 vaccine, announced it wants to develop a malaria vaccine using mRNA technology and aims to start clinical trials by the end of this year.

Shade_Wilder
I have had malaria many times (15+), and I am a great fan of its weight-loss potential. The first time I caught it, back in Indonesia in the early 90s, I lost about 20 Kilos and kept it off for…

palooka
2 minutes ago, Shade_Wilder said: I have had malaria many times (15+), and I am a great fan of its weight-loss potential. The first time I caught it, back in Indonesia in the early 90s, I lost about 20 Kilos…

Noble_Design
There are still malaria here? I thought dengue fever is more prevalent and deadlier. My number one fear of mosquitoes was never the brown Culex type which spreads malaria but always the Aedes with it's unmistakable black and white striped…

riclag
Spay poison (40% deet)on my body everyday for the last 12years ,while in Thailand with the hopes that , they won’t bite me. Dengue is the last thing Im worried about! Those bites in the past got infected a few…
Janneman
Sleep under a mosquito net, the ones that transfer malaria are mostly active between sunset and sunrise.. When not sleeping, use DEET on your exposed skin, usually arms, legs and face. It is not a 100% guarantee of course but…

What is Anzac Day? Dawn service for Anzac Day at Hellfire Pass in Thailand

Group of Vietnamese stole over 450,000 baht from Uniqlo