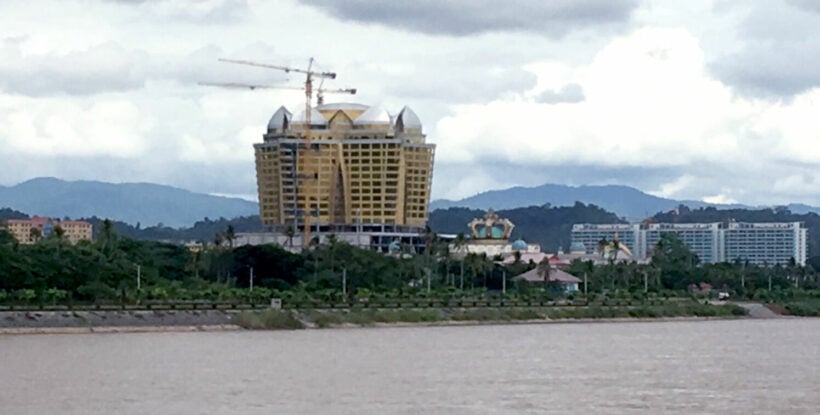 Construction has resumed on a private airport in Laos on the Thai border as part of the Golden Triangle Special Economic Zone, a casino resort complex considered to be rife with illegal activity. The owner of the development, Zhao Wei, is the chairman of the Dok Ngiew Kham Group and has been named in connection with human trafficking, drugs, money laundering, and illegal animal products.

A representative for the Golden Triangle Special Economic Zone stated that they have cleared obstacles and began work on the private airport in an interview with Radio Free Asia. The project had previously been held up by local landowners that did now want to give up their land to see the airport built.

The Dok Ngiew Kgam Group appears to have offered ample financial compensation as the objections have been resolved and a local who gave up her land was reported to say that many were opposed at first, but they were now happy with the payment they received and are no longer resisting the airport.

Opposition does still exist, however, as residents in Laos’ Bokeo province just across the border from Chiang Rai fear the private airport will not benefit the local economy but will bring in more criminal activity. Many see the airport as unnecessary since the Houayxay airport is not far from there, and believe it will only serve wealthy casino customers. There are a few that believe that the airport may still bring in some additional tourism outside the Special Economic Zone to the area.

But many experts in the area believe that at best the airport will serve to further increase the Chinese control and influence in the area and at worst it will become an easy conduit to drug trafficking or worse. China is already the number one foreign investor in Laos and second only to Thailand in trade. They have invested US $1.3 trillion into a Belt and Road initiative to build infrastructure, high-speed rail, and hydropower dams. Some fear the increased Chinese power in the region.

But worse is the possibility of illegal activities going on in the Special Economic Zone. An anonymous employee said that drugs, prostitutes, and illegal wildlife are all readily available inside. The United States declared the entire business network, including the Kings Romans Casino in the economic zone, to be a transnational criminal organisation. They have sanctioned companies and people involved in Laos, Thailand, and Hong Kong, including Zhao Wei himself.

Experts in the region believe this is opening the gates to create a new pathway for drug trafficking and more. When asked about the lawlessness in several of these Special Economic Zones, an official on the Lao Ministry of Planning and Investment’s Special Economic Zone Control Department said they were unable to comment on the issue.

Stonker
9 hours ago, Thaiger said: Many see the airport as unnecessary since the Houayxay airport is not far from there, and believe it will only serve wealthy casino customers. The casino's paying for it.   Why would they pay for…
Leo
And make no mistake, Zhao Wei is a distinctly mainland Chinese name.
Norton
I don't see a problem here, Isn't this business as usual?  This particular hemisphere breeds dodginess.  Go with the flow.

KaptainRob
6 hours ago, Norton said: I don't see a problem here, Isn't this business as usual?  This particular hemisphere breeds dodginess.  Go with the flow. Check out Sihanoukville, Cambodia on Google and Youtube. Also Tachileik, Burma - looks and sounds rosy but gambling,…
Norton
Tongue and cheek in my reply to this topic.  All the same, this is the world and how it works and has from the beginning.  No, disrespect intended on this reply.