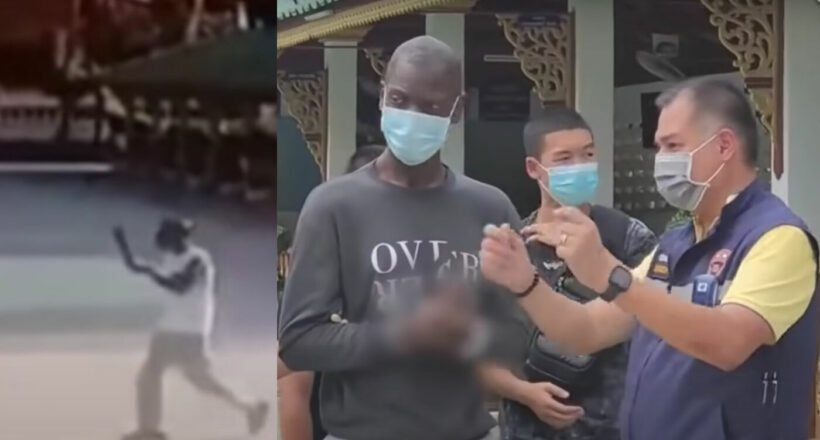 A British man was arrested in Chiang Mai after brandishing a machete at Wat Eranthawan, a temple in the south of the northern city. Clive George Davidson was arrested by police after a stand-off while taking him into custody and is being charged with multiple crimes.

CCTV footage shows 50 year old Davidson getting out of his car and pacing around the temple with the machete, following a monk to the doorway before beginning to walk away and doubling back again. Abbot Phra Khajonsak retreated into the temple, locked the door, and then called the police for help.

Davidson’s visa had expired and a small amount of marijuana was found in his car. He has not officially confessed to the crime, though he reportedly admitted it was him holding the machete in the video at the temple. Police found him in his home in Hang Dong, and video footage appeared to show him rolling a joint or cigarette while police look in the window and try to convince him to come out. After a 4-hour stand-off, police left to obtain an arrest warrant.

He’s being charged with possession and use of an illicit substance, overstaying his visa, trespassing, and criminal mischief.

No motive has been confirmed for the attack on the temple, but a disturbance in a neighbour’s home involving Davidson was reported before he headed to the temple. The British man reportedly said that he just wanted to talk to the monk. In video footage during his arrest, Davidson could be heard complaining about the police corruption and that they smashed his window and tried to force open the door. He also alluded to being tired, possibly of corruption in the village or some alleged harassment.

“I went to the wat and said, ‘I am tired, I want to… leave me alone or I want to kill myself.’ I was not talking to the monk. I was just saying I’m tired.”