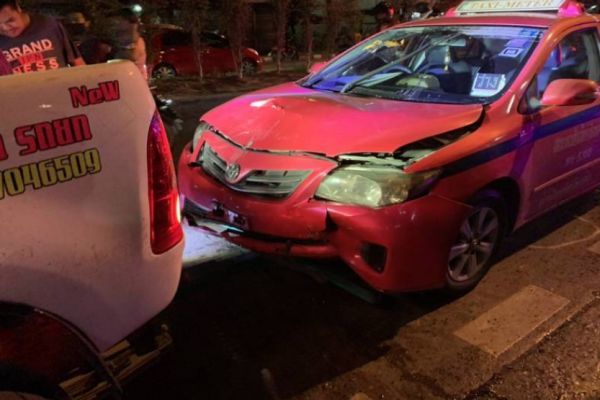 A Bangkok man has allegedly jumped into the backseat of a taxi and , once the taxi got going, started stabbing the driver early this morning, causing the driver to lose control of the vehicle and crash into a motorbike and other cars.

A man in the Thonburi district ran into heavy traffic on Charunsanitwong road. He tried opening the doors on random cars. They were all locked. He kept running around, trying to open the car doors until he opened the taxi’s backdoor and got into the backseat.

The driver says the man started stabbing him with a knife and a sharpened iron rod. He says he tried to block the attacker, but lost control of his taxi, crashing into other cars and the motorbike. The man on the motorbike was flung in the air and landed on the windshield of the taxi.

The driver was able to struggle to get out of the car and was only slightly injured. The alleged attacker reportedly stayed in the taxi and began to harm himself. Police restrained the man and took him to a nearby hospital.