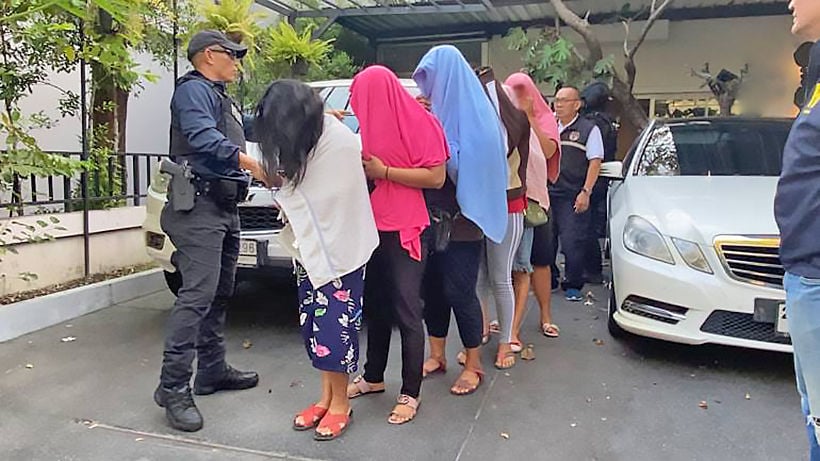 PHOTO: Police arrested a Chinese man and woman and found at least seven Thai surrogate mothers in coordinated raids in Bangkok and vicinity. The pair are suspected of involvement in a cross-border surrogacy racket - Thai PBS World

Two Chinese nationals, a man and a woman, have been arrested after coordinated raids on illegal assisted-reproduction clinics in and around Bangkok. The pair are suspected of involvement in a major cross-border surrogacy racket. Police found at least seven Thai surrogate mothers in the raids.

In a raid on a house in Lat Phrao district, police found seven pregnant Thai women and a 20-day old baby, who was being looked after by a woman claiming she was paid 14,000 baht to look after babies in the house. A Chinese man in the house was arrested on suspicion of hiring the women to become surrogate mothers.

Police believe the surrogate mothers would be sent to Laos, where embryos would be implanted at assisted-reproduction clinics, then return to the gang’s houses in greater Bangkok, where they would be looked after until seven-months pregnant. They’d then be sent to China to deliver the babies. But the coronavirus outbreak means the babies are now being born in Thailand.

The deputy commissioner of the Central Investigation Bureau said the recruiter of surrogate mothers would take care of all expenses they incurred. He said the gang had been operating since 2013, and he had no idea how many babies had been born or whether any were sent back to China, or for what purposes.

In another Bangkok raid, police found an illegal clinic staffed by a Chinese woman, and eight Chinese couples at a guest house, who they believe were seeking assisted-reproduction services.

Eight Burmese women, thought to be maids, were also found.