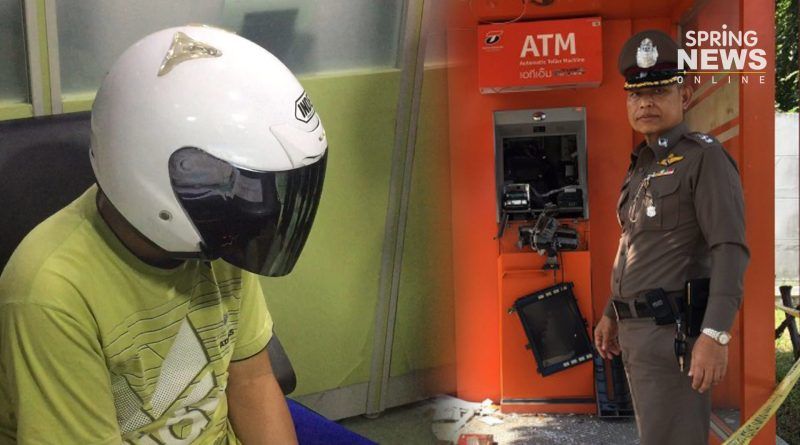 “After the combination of beer and insulin, Prakit grabbed a metal pole and drove his motorbike to the ATMs.”

A diabetic man is blaming his insulin injections after going on an ATM robbery spree. The man had three attempts to break into ATMs in one night, all unsuccessful. The incidents happened in the early hours of October 9. He was was arrested the next day on October 10.

He had used a white Yamaha motorbike with no license plates as his “getaway of choice”.

Police received information about a man attempting to break into ATMs in the area. He used a metal pole to try and pry the ATMs open, but turns out it wasn’t quite as easy as he thought. His efforts contributed approximately zero baht.

Police reviewed the CCTV footage and tracked Prakit’s route home. They then arrested him and found the motorbike used as the vehicle in the robbery captured by the security footage.

Prakit admitted to attempting to break into the ATMs. He said he’d been drinking 6 to 7 bottles of beer just after having an insulin shot for his diabetes. He told police it made him go crazy “losing all sense of right and wrong”.

His sugar level was over 400 so he needed to take the shot right away when he was drinking. After the cocktail of beer and insulin, Prakit grabbed a metal pole and headed to the ATMs.

He insists that he went crazy and lost all sense of right and wrong saying he wore his pants inside out to commit the crime.

Keep in contact with The Thaiger by following our Facebook page.
News Categories:BangkokCrime
Related Topics:ATMbeerInsulinSam Dam PoliceTheftunsuccessful
Up Next

A man is dead after plummeting 10 metres from Bangkok’s Rama 3 bridge yesterday. Police and rescue workers were called to an area below the bridge and found the body of a 43 year old motorcyclist, identified only as “Kiatpong.” Still on the bridge was his Honda Zoomer-X scooter, and there was evidence of scratches along the bridge wall. He appeared to have been a deliveryman as there was a large delivery box on the back of the motorbike. Witnesses who saw him fall say he was killed instantly. Motorcycles are not allowed on the Rama 3 bridge. Police looked at […]