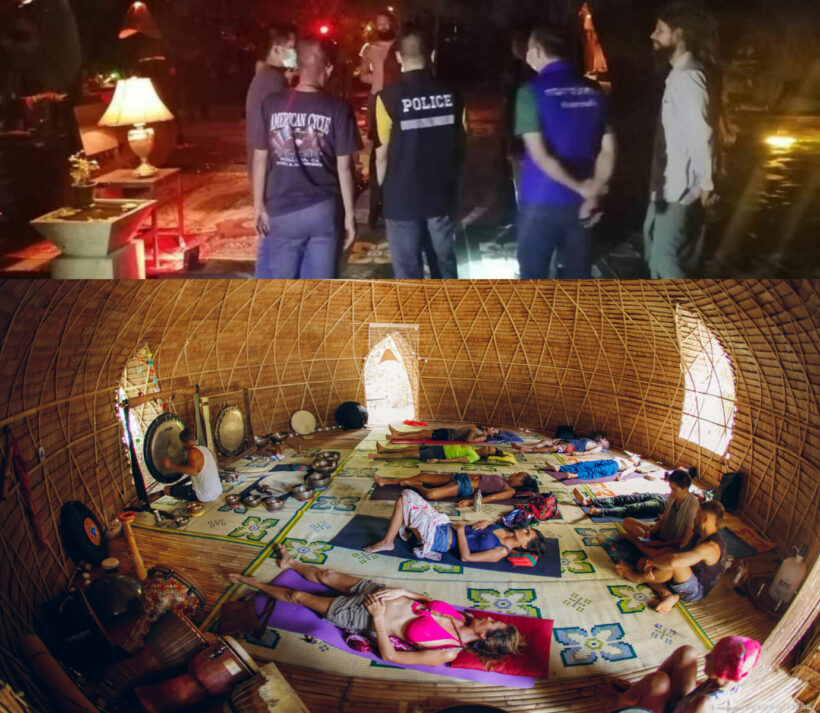 Police in Koh Phangan arrested 2 Russian men and an American woman in a raid at a health spa following complaints from locals of illegal activities and Covid-19 restriction violations. They are accused of a range of charges relating to the legality of the business, though the information is unclear if they face any charges for breaking any Covid-19 rules.

The spa is known as Aum Sound Healing, a secluded space on Koh Phangan that offers spa and sauna services, as well as gatherings and events like meditation circles and sound healing ceremonies, according to a local who had visited. The business sells health packages but hosts events that are mostly donation-based and specialises in healthy living, supplying vegan food and teas.

But despite being secluded, there are local residents living nearby, who claimed that the spa was holding parties in violation of Covid-19 restrictions that had become a nuisance, so they complained to authorities.

The Department Of Provincial Administration officials joined with local Phangan police under the direction of Surat Thani’s provincial governor and the Koh Phangan district chief to execute the raid. They first sent in 2 officers to inspect the operations there and confirm there was enough evidence or probable cause to arrest the owners and search the premises.

Upon confirmation, the spa was raided and the owners, 54 year old Russian Sergei, 34 year old Russian Anton, and 36 year old American Elizabeth. They were all transported to the Koh Phangan police station to face charges.

While it seems there may not have been enough evidence of parties and events in violation of the Covid-19 restrictions, police are prosecuting the owners on charges of employing foreigners that do not have work permits, violating 90-day reporting, and running an unlicensed health spa.

Koh Phangan, well-known as a hub for spiritualism and alternative beliefs, often found residents denying or debating Covid-19 and prevention techniques with expats frequently flouting pandemic restrictions and promoting alternate treatment methods and beliefs about the virus. As a relatively isolated island, Covid-19 infections were rare on Phangan despite frequent ignoring of safety regulations and illegal gatherings and parties continuing during lockdowns.

GuyIncognito
So many illegal crusty jugglers working on that island, plenty more to remove