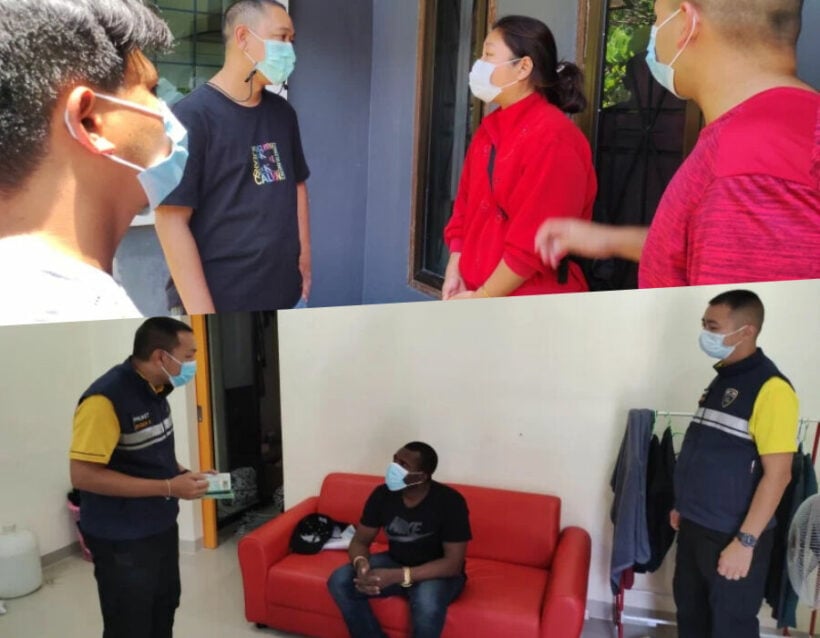 PHOTO: A Thai Woman and Nigerian man were arrested for online romance scams. (via Phuket Immigration)

Police in Phuket have arrested a Thai woman and a Nigerian man accused of bilking victims out of at least 11 million baht in online romance scams. The pair were taken into custody by officers from the Immigration Bureau and the Cherng Talay Police at a rented room located in Srisoonthorn, Thalang.

Police only made public the arrest yesterday though they were actually taken into custody on Tuesday. The Thai woman is 26 years old and was already being sought for an outstanding warrant from the Chon Buri Provincial Court on Monday. It is unclear if the pair had been hiding out in Phuket for a while or had just left Chon Buri when the warrant was issued and snuck into Phuket within the last week.

Immigration officers said of the Nigerian man only that he was staying in Thailand illegally and did not mention any details of his involvement in the online scams. An investigation is forthcoming to determine if he had a hand in scamming these people though.

According to police, the Thai woman had created multiple fake identities on Facebook and other social media platforms including a LINE account. She used those accounts to seduce online victims, tricking them into believing that they were in a romantic relationship with the Thai woman. She would then request money to pay for things like living expenses or ask them to buy her gifts or ask that they send money in order for her to send them things by postal mail.

But the Thai woman claimed to be a pawn in the scheme. She confessed to having pulled these online scams repeatedly for the last 6 months and directed payments by all her victims to be transferred to one specific account, in total over 11 million baht. She says that she was then instructed to transfer the money to other bank accounts by an unnamed network in Bangkok. She says that she was paid to take part in the scams but did not get to keep the 11 million baht.

The 2 are being charged for the crimes that the arrest warrant in Chon Buri was issued for and are being held at Cherng Talay Police Station. Subsequent charges are likely regarding the online romance scams.

riclag
Years ago my wife’s friend got sucked in on one of these scams ! She was new to the online social platforms  and was easy prey ! Being lonely and a alcoholic, made her susceptible .imop The scammer sent pictures…

Donald
As a rule it's mostly greed eats brain, but also lonely and gullible people are the victims. I had a very good friend many years ago. A German woman who had found herself sick and alone after she divorced her…

Police search for foreigner for rape of Khon Kaen masseuse