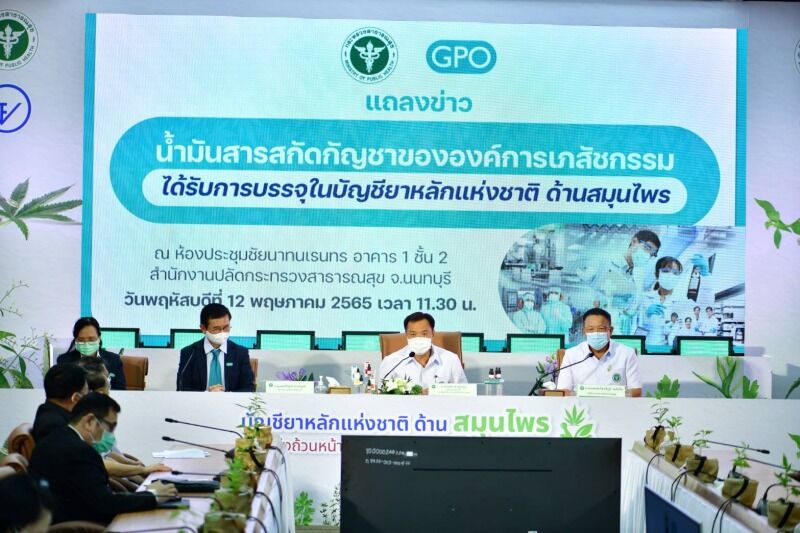 photo via Ministry of Public Health

Yesterday, the Ministry of Public Health announced that 3 types of cannabis oil have been added to Thailand’s National List of Essential Medicines, or NLEM. Now that cannabis is listed as an “essential medicine”, government hospitals may freely prescribe cannabis extract oil to patients in selected circumstances, according to Thailand’s Government Pharmaceutical Organisation, or the GPO.

The first type of cannabis oil contains a higher percentage of tetrahydrocannabinol, or THC, the psychoactive compound found in marijuana. The second type has a higher rate of CBD, or cannabidiol, which has medicinal properties but no psychoactive effects. The third solution has equal levels of THC and CBD, according to Dr Nathakan Suwanpiddokul, a pharmacist for the GPO.

The addition of cannabis oil to the NLEM will also make the medicine much more accessible in Thailand because the government will cover the costs for anyone prescribed cannabis oil in a state-owned hospital.

Nationwide, doctors from 893 government hospitals may now prescribe cannabis oil to patients. In total, there are now 1,173 marijuana clinics in Thailand, according to Minister of Public Health, Anutin Charnvirakul.

“It is gratifying that all three formulations of medical cannabis extract oils have been included in the NLEM. On May 14, this will not only provide patients with more healthcare options, but will help to strengthen the nation’s medicine. It also reduces the cost of importing expensive drugs from abroad.”

The addition of cannabis to the NLEM will soon be published in the Royal Gazette.

Birds seized by police during drug raids auctioned off