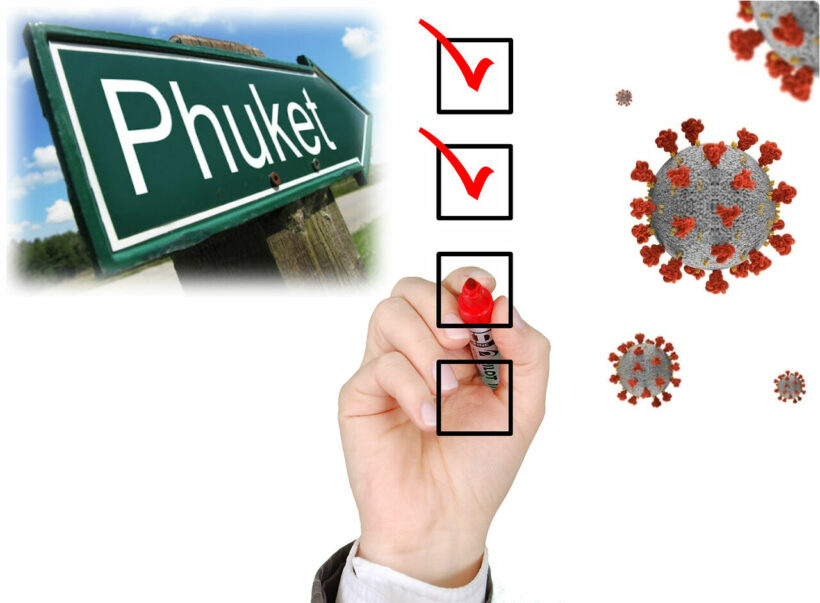 PHOTO: New additions to the checklist of rules to enter Phuket. (via Maxpixel)

Perhaps feeling restless as it had been a day or two since any changes or additions to the constantly evolving rules to enter the Phuket Sandbox had been made, Phuket Governor Narong Woonciew issued a new provincial order granting special entry exceptions for certain people. The order would allow qualifying people passing through Phuket briefly to only present one of the required documents to enter the island.

The original rules had people who flew internationally into the Phuket Sandbox facing the strictest admission process, requiring both vaccination and a negative Covid-19 test (among other requirements like a Certificate of Entry, US $100,000 insurance coverage, confirmed SHA Plus hotel stay, and prepayment for Covid-19 testing).

People travelling domestically and entering Phuket overland or by boat had to have either vaccination or a negative Covid-19 test, but with the spread of Covid-19, officials revised the rules to require both. The change was announced Sunday but put into effect Tuesday and caused a string of nearly 400 uninformed travellers to be turned away at the border.

For a while, the only people who could enter Phuket without both a vaccine and a negative test were people who had proof that they had already recovered from Covid-19 within the last 90 days as it provides similar protection as vaccines.

But what about residents who had left the island before the strict new rules and haven’t had access to vaccines that are often scarce in Thailand? A new exception to the rules was made for them, that they could just provide a negative test or proof of vaccination, but only if their names were on a house registration in Phuket. If not, then they would still need a test and either vaccination or recovery from Covid-19 already.

Now the Ministry of Interior’s Phuket Info Centre posted Governor Narong’s new order earlier today with new rules to grant new exemption to 5 types of travellers who would only briefly pass through Phuket or had a specific purpose for entering. Those likely to be passing through quickly are delivery drivers bringing medical equipment and ambulances with emergency patients and rescue workers, as well as those heading to Phuket International Airport to catch a flight.

People exempted for a specific purpose would be students attending on-campus classes at a Phuket higher education institution and people coming to Phuket in order to receive their second vaccine. Everyone in those 5 categories can enter with either proof of vaccination or a negative Covid-19 test.

For all of these instances, only an RT-PCR or rapid antigen test administered professionally by a medical facility will be accepted. (Newly approved home test kit results will not be.) To be considered fully vaccinated, a person must have received at least 2 weeks in advance either 2 doses of Sinovac or Sinopharm, or at least 1 dose of AstraZeneca, Pfizer, Moderna or Johnson & Johnson.

Here’s a current chart of rules and exceptions for people arriving into Phuket:

Stonker
1 minute ago, King Cotton said: I'm fairly sure that @dmacarelli, in using the term 'they', meant the Thai tourism authorities and central govt, rather than the Phuket and Pattaya tourist centres specifically - or as you put it, 'a lot of Thais'…

BlueSphinx
3 minutes ago, Stonker said: I don't think I'm the one being childish here, @King Cotton, or the one who needs to apologise. Of course he fully agreed with your interpretation of his 'they' reference. THAT  WAS  ALSO  MY INTERPRETATION…
Stonker
36 minutes ago, King Cotton said: Oops, it's the Stonker memory failing again, as today's post confirms. Further to my preceding post, it does look like, in your desperate attempts to look smart, you're now out-smarting yourself. What was that, about…
Stonker
26 minutes ago, AlexPTY said: This book is already bigger than the Yellow Pages. Pathetic really, feel sorry for those who got rejected because they didn't watch late night news.  You're right, @AlexPTY.   Who's the bigger fool - the fool,…
Stonker
11 minutes ago, BlueSphinx said: @Stonker aka the Oracle that is never wrong and always right (even if it isn't).   And close family of @THETRUTH by the way... No, @BlueSphinx, frequently wrong and only too happy to admit when…