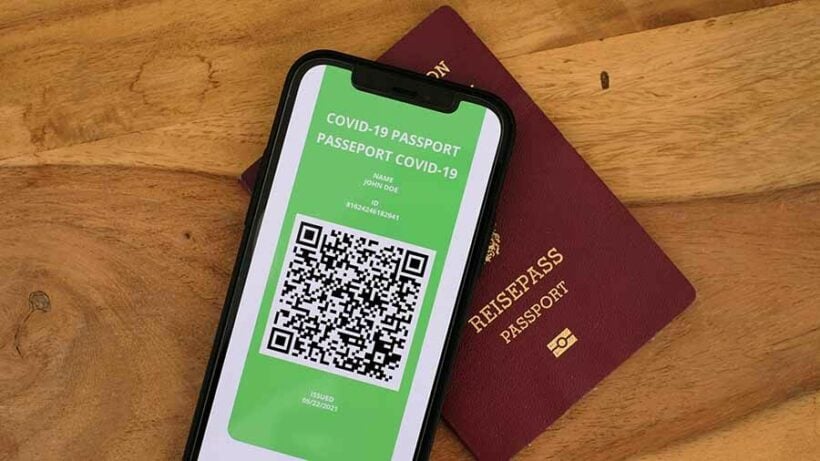 Industry representatives are urging the Thai government to press ahead with the adoption of a vaccine passport scheme to re-ignite international tourism. The Joint Standing Committee on Commerce, Industry and Banking is also pushing for Thailand to form travel bubble arrangements with countries where Covid-19 infection rates are low to moderate.

Kalin Sarasin from the Thai Chamber of Commerce and a JSCCIB member points to the Digital Green Pass being introduced by the EU, which allows vaccinated people to travel more freely. He believes Thailand should introduce something similar.

“JSCCIB is confident a vaccine passport would boost economic sentiment. Many countries have already started mass vaccination regimes for their people.”

(Video below about the current world and Thailand Covid travel situation)

He adds that private companies should be allowed to purchase and distribute vaccines to employees in order to accelerate the national vaccine rollout.

The push for a vaccine passport scheme follows confirmation from the Thai PM that he has ordered a study into the idea. However, Prayut Chan-o-cha points out that nobody knows how effective such a scheme would be. The idea does have its critics, particularly among rights’ groups and doctors, who say there is not yet enough data to show that vaccines prevent transmission.

A limited number of Covid-19 vaccines have arrived in Thailand and have been distributed to 13 priority provinces. Healthcare workers and vulnerable groups are among the first people to be inoculated.

Supant Mongkolsuthree, a JSCCIB member from the Federation of Thai Industries, says a vaccine passport policy is one more way to restore tourism and, as vaccines are rolled out in the Kingdom, the economy has a chance at recovery.

“JSCCIB believes the economy is recovering. The vaccine will gradually build up confidence among business people.”