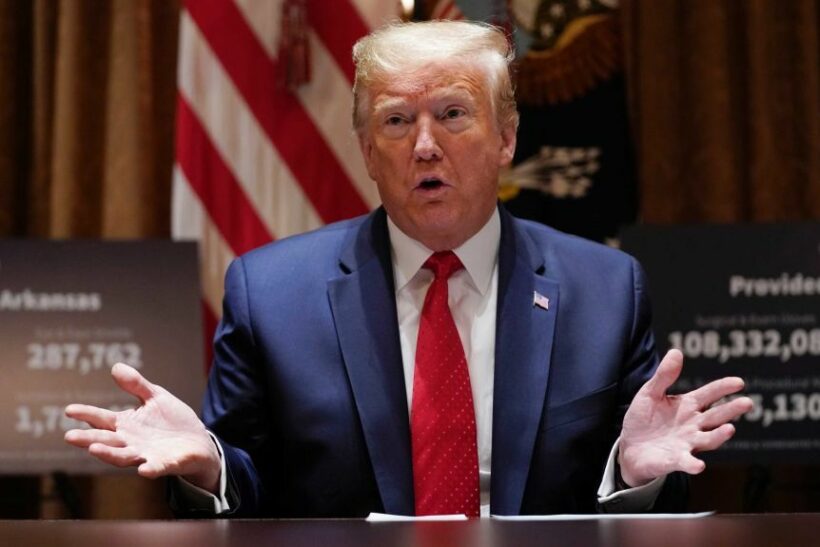 In one of his notorious Twitter posts, US President Donald Trump once again raged against China over the Covid-19 pandemic sweeping the globe, blaming Beijing for a “mass worldwide killing.” The early morning tweet yesterday, which referred to an unidentified “wacko in China”, is the latest heated rhetoric from Washington, where Trump is making attacks on Beijing a central narrative as his attention turns to re-election.

“It was the ‘incompetence of China’, and nothing else, that did this mass worldwide killing.”

The virus was first detected in the Chinese city of Wuhan last December and spread rapidly around the world, killing more than 329,000 as of today, and triggering untold economic damage. The total number of worldwide cases pushed past the 5 million case milestone today.

Trump initially played down the seriousness of the threat and repeatedly announced he believed China was addressing the outbreak, even praising Beijing’s response. He later shifted to blaming China for allowing the virus to spread.

The White House has also suggested, without evidence, that the virus originated in a Wuhan laboratory and was accidentally released, and President Trump has made vague but repeated threats of retaliation against the chief economic rival of the US.

He has also threatened to permanently cease US funding of the World Health Organisation, over what he calls its assistance to China in covering up the extent of the outbreak.

The diplomatic rift is growing rapidly just weeks after Trump celebrated a “truce” in his trade war with China, and comes after months of effusive praise for his Chinese counterpart Xi Jinping. Meanwhile tempers are fraying in China, where foreign ministry spokesman Zhao Lijian angered Washington by promoting a conspiracy theory that the virus was brought to China by the US military.

Countering Trump’s WHO critcism, Zhao yesterday stressed what he called the “many mistakes and loopholes on the US side, their lies and rumours.”

“The US has seemingly forgotten that in the past, US leaders have repeatedly and publicly praised China’s anti-epidemic work.”

Zhao blamed US politicians “who want to shift the blame but can’t shift it away.”

During a phone call with Bangladeshi PM Sheikh Hasina, Xi appeared again to take a swipe at the US. State news agency Xinhua reports:

“Xi emphasised that China opposes actions that interfere with international anti-epidemic cooperation and harm the world’s, and especially developing countries’, efforts to fight the pandemic.”

“China is willing to continue to work with the international community, including Bangladesh, to support the WHO’s leadership role, promote international joint prevention and control cooperation, and safeguard global public health security.”

But US secretary of State Mike Pompeo told a news conference yesterday that the Covid-19 crisis has ended US illusions of close ties with China, saying “we greatly underestimated the degree to which Beijing is ideologically and politically hostile to free nations. China is led by a brutal, authoritarian regime.”

“The Chinese Communist Party’s response to the Covid-19 outbreak in Wuhan has accelerated our more realistic understanding of Communist China. Today, as we all sit here this morning, Beijing continues to deny investigators access to relevant facilities, to withhold live virus samples, to censor discussion on the pandemic within China and much, much more.”

Pompeo offered no evidence of his claim.