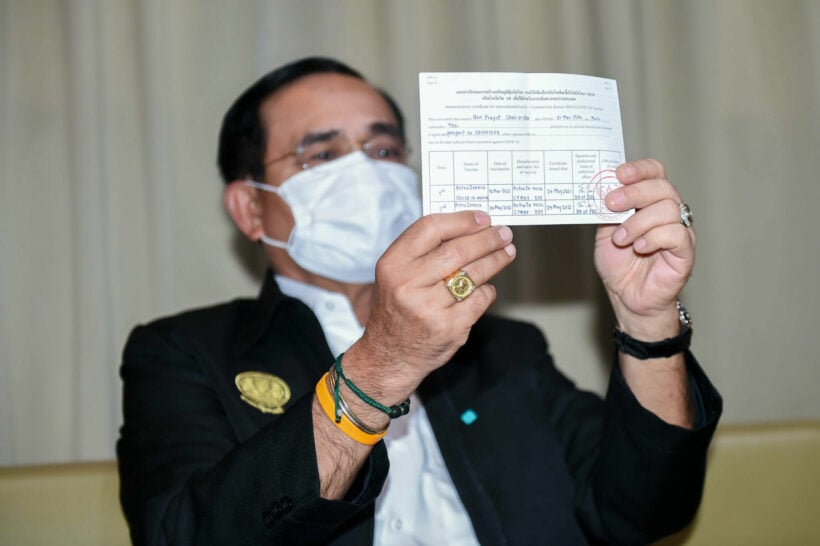 PHOTO: PM Prayut asks everyone to work hard together including getting vaccinated. (via CCSA)

Now that it’s been a half week since PM Prayut Chan-o-cha announced that Thailand will be reopening in 120 days, mid-October, multitudes of plans are underway to get the country ready. In a statement online tonight, the prime minister asked for unity, requesting people and government offices to work together to achieve this massive undertaking.

PM Prayut reiterated his declaration of Thailand’s reopening, saying that the 120 day period is not an exact countdown set in stone, but rather a preparation period meant to give a timeframe for provinces to ready themselves for reopening. One big factor is the need to vaccinate 70% of the population of the province before it can open.

The government believes that they will reach their goal of giving at least one dose of a Covid-19 vaccine to 50 million people by October, allowing the reopening to continue. Failure to meet this goal, or new big Covid-19 outbreaks may delay or cancel the reopening scheme.

In his statement online though, the prime minister said that Thai people are fighting to get by and every week counts as we push towards reopening. As such, he is requesting that all departments in the federal and local governments be operating at their best capacity to work towards the shared national goal.

PM Prayut believes that the reopening can be achieved, but that some setbacks along the way are to be expected. He asked people not to be discouraged and to keep working together and push forward towards getting international tourism back on its feet in Thailand.

“There might be problems that could affect our work in the meantime, whether it is about delivering vaccines, new Covid-19 mutants [sic], or other matters. But we all have to do our best to achieve our goals.”

The prime minister said that the reopening will progress in steps. Earlier announcements explained that Phuket will open first in just 10 days, while Koh Samui and its neighbours will follow on July 15. Krabi and areas surrounding Phuket will open next in August, and September is the scheduled date for Chiang Mai, Buriram, and Pattaya, though the latter has plans to push up its opening date to August. By October, Bangkok, Hua Hin, and any other Thai province that is prepared will reopen.

Patnou
Dear k. Prayut, if no help from banks loans under government guaranty, most cannot re-invest to fail once more. At this time as resort GM all banks refused loans when seeing damaged 2020 balance sheet, thus, propaganda to help has…

KaptainRob
1 hour ago, Jason said: At least there is some sense of a plan, a target, a timeline. Defining some milestones on the road back to something like normal, would be even better. People can work to a plan. People…
Paco
Why listen to him? He does not listen to the people at all, they want he leaves and he does not, time to listen Prayut to the Thai people, why should we listen to you or any rule you make?…

AlexPTY
Not that long ago PM asked everyone to work together on fighting this pandemic, i guess priorities changed. I just wonder what would be next? You should know me already, i just being sarcastic...

King Cotton
23 minutes ago, AlexPTY said: i just being sarcastic... Sure . . . it's hard not to be with this clown in charge.