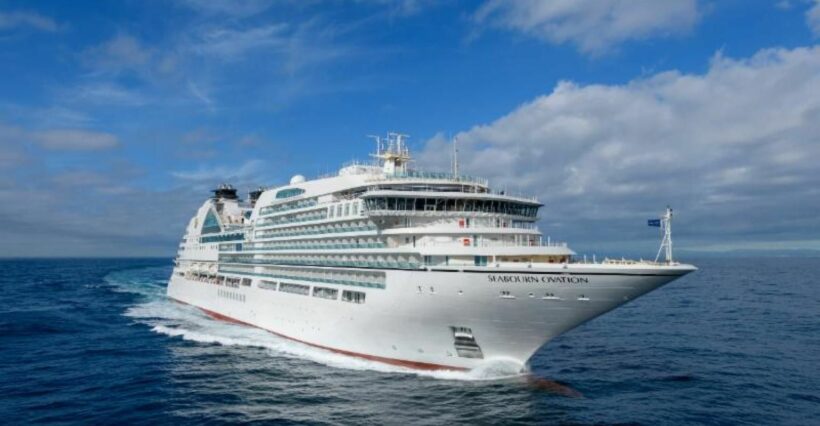 Over 4,000 tourists and ship crews arrive in Phuket today, on two separate cruise liners, one from Hong Kong and one out of Singapore. There has been a sudden surge of interest in arriving cruise ships after the cruise boat still anchored in Yokohama Bay with a cluster

The Seabourn Ovation arrived from Hong Kong just after 7am this morning with 919 on board – 487 tourists and 432 crew. The Quantum of the Seas arrived from Singapore at 10am with 3,149 passengers and crew. Both arrived at the Phuket Deep Sea Port in Cape Panwa.

Phuket’s Marine Office Director Wiwat Chitchertwong has also confirmed that at least 17 cruise ships will be coming to Phuket in coming months. Four cruise ships arrive in Phuket this week, according a report in Phuket News. Apart from the two arriving this morning…

• Star Clipper arrives on Saturday 5:30am.

The Phuket Public Health Office have confirmed they are screening passengers and crew and following up the coronavirus situation.

“Officers are still screening people for elevated body temperature at Phuket International Airport, bus terminals, piers around the island, and other places,” Dr Thanit said in The Phuket News.

The head of the PPHO also confirmed that the number of people suspected of being infected with the virus in Phuket “keeps decreasing”, but declined to mention how many people in Phuket were currently being  observed or were in quarantine.

“There are no confirmed reports of people infected with the virus on board, as some people believe. It is a different cruise ship.”

The PPHO chief was speaking about media reports and the ‘panic’ about passengers on board another cruise ship that was being denied a port, although the MS Westerdam has now been given permission to dock in Sihanoukville, Cambodia, this morning (it arrived at 7am).

Fears of the novel coronavirus has prompted four different nations and the US territory of Guam to deny them entry despite no one on board being diagnosed with the illness that has caused global panic.

The fears appear to stem from confusion between this ship and its sister ship, he Diamond Princess, which has been quarantined in Yokohama, Japan with 174 cases of coronavirus. Referring to the arrival of MS Westerdam in Cambodia today…

“Guests will disembark in Sihanoukville over the next few days and transfer via charter flights to Phnom Penh for forward travel home.” Read more HERE.

The reference to the “infected” cruise liners mentioned at the media conference in Phuket yesterday, refers to the Thai Public Health Minister Anutin Charnvirakul ordering officials to not let any passengers or crew on the Westerdam cruise ship from Japan to disembark at the Laem Chabang port.

After being denied entry into Japan, Guam, the Philippines and Taiwan, unnerved vacationers on the Westerdam were initially relieved when the cruise ship’s captain announced on Monday that they’d finally be disembarking in Bangkok, Thailand, on February 13. But the ship was back in limbo after Thailand Public Health Minister Anutin Charnverakul shared on Facebook Monday afternoon that it would not be allowed to dock after all. Read more HERE.

Thai evacuee from Wuhan clear of coronavirus, discharged from hospital