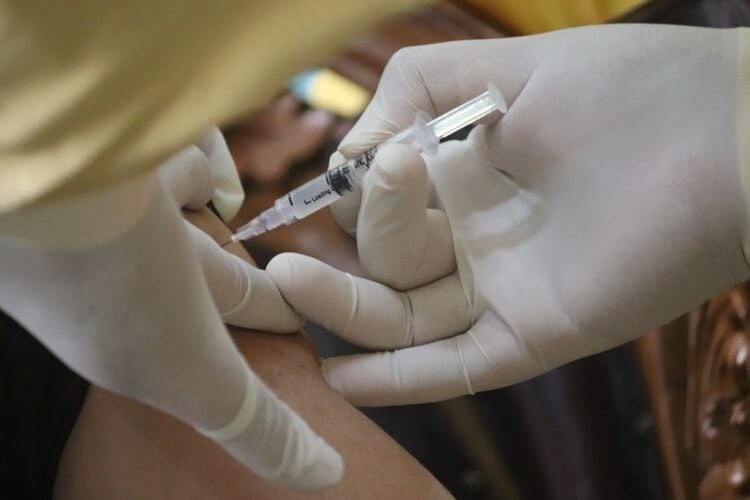 A recent study of Covid-19 vaccines shows that using AstraZeneca for the first dose, followed by an mRNA vaccine for the second, is as effective as 2 mRNA doses. The AstraZeneca vaccine is a viral vector vaccine, whereas vaccines such as Pfizer and Moderna use mRNA technology.

Thai PBS World reports that the study was carried out in Germany, using 2 groups, 1 of which received AstraZeneca as a first dose, followed by either Pfizer or Moderna as a second dose. The second group received 2 doses of either Pfizer or Moderna. The 2 doses of the mRNA vaccines were administered 4 weeks apart, whereas the combination of AstraZeneca and Moderna or Pfizer was administered 11 weeks apart.

The results were published in the Nature Medicine journal on Monday, according to Manop Pithukpakorn from the Excellence Centre for Genomics and Precision Medicine at Siriraj Hospital. He says the results show that combining AstraZeneca and an mRNA vaccine provokes a level of anti-spike and neutralising antibodies that is 10 times higher than the level seen after 2 doses of AstraZeneca. He says the level is similar to that observed after 2 doses of either Pfizer or Moderna.

In a further positive development, there were fewer adverse side-effects following the combination of AstraZeneca and an mRNA vaccine, compared to the side-effects observed after 2 mRNA doses. The latest findings back up an earlier study that appeared to show that using AstaZeneca as the first dose and Pfizer or Moderna as the second may be the way to vaccinate in future.

Meanwhile, Thailand is still waiting for an mRNA vaccine, the first of which will be 1.5 million Pfizer doses donated by the US government and expected to arrive tomorrow. The government has also ordered another 20 million Pfizer doses, while 5 million doses of Moderna have been ordered for sale at private hospitals. The latter 2 orders are not expected to arrive until the last quarter of the year.

Paco
They can claim and state what they want, still I will never take them and certainly not mixed

King Cotton
Pheww, that's a relief . . . I've got mine booked for October . . . 2023.
Ttalk
1 hour ago, Paco said: They can claim and state what they want, still I will never take them and certainly not mixed You mean you don't want billions of spike proteins injected into you with zero long terms studies…

Soidog
I see this was a German study. Is there any link between Germany and AstraZeneca ? …
Paco
4 hours ago, Ttalk said: You mean you don't want billions of spike proteins injected into you with zero long terms studies done of the effects they have on you besides causing blood clots? I was looking at a video…