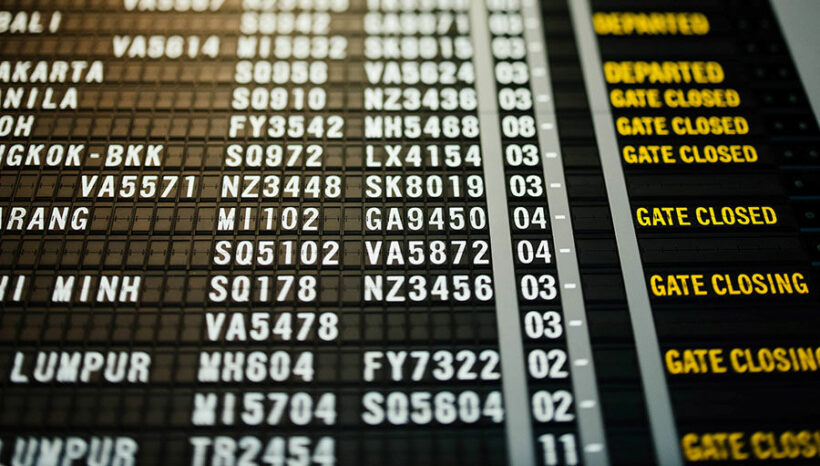 As most Asian countries dust themselves off and emerge from the ashes of the initial ravages of the Covid-19 pandemic, a report in the Chiang Rai Times looks at how flight restrictions may affect travel in the region. International flights are still off-limits for many countries, but the situation is expected to gradually improve, particularly with the introduction of “travel bubbles” and “green lanes”.

Thailand
A ban on international flights is in place until at least the end of June, with many expecting it to be extended past then. Exceptions are being made for repatriation flights for Thai citizens who wish to return home, and foreigners in possession of work permits. In both cases, paperwork is required from Thai embassies and non-Thais must show they have tested negative for Covid-19. All arrivals then enter a mandatory 14 day quarantine period, although in the case of foreigners, this is at their own expense.

Thailand is now considering opening up to tourists from low-risk countries, such as China, South Korea, Vietnam and Taiwan. But wether this is in July or sometime later is anyone’s guess. It is unlikely Thailand would allow visitors from ‘at risk’ countries into Thailand any time soon. That would probably include most European countries, South American countries, the UK and the US.

Malaysia
Domestic travel between states resumed yesterday but a ban on international travel remains in force. Exceptions are made for repatriating Malaysians, who must then self-isolate at home for 14 days.

Singapore
The city state’s borders remain closed, although it is permitting air passengers to transit through its airport. Singapore is believed to be considering a travel bubble with Malaysia and New Zealand, which would see international flights resumed between the 3 countries. Singapore has had an enormous surge in cases since the start of April, mostly in it migrant worker community.

Indonesia
The borders remain closed to international arrivals, other than Indonesian citizens and long-term pass holders, who must show evidence of having tested negative for Covid-19 or agree to be tested at the airport. Domestic flights have resumed with restrictions, including airlines only being permitted to operate at 70% capacity.

China
Most foreigners are banned from entering China for now, including those with valid visas and residency permits. Exceptions are being made for some business executives and expert personnel. Chinese nationals are being allowed back in and the country has agreed on a pact with South Korea and Singapore to enable business travel between the 3 countries.

South Korea
Some international flights are now operating, with all arrivals, whether foreign or South Korean, quarantined for 2 weeks. Exceptions are being made for diplomats and foreigners with official business status, who are instead tested on arrival.

India
The country currently has over 287,000+ cases (as of Thursday 5pm Thai time) of Covid-19 and its borders are sealed. At the start of April India had just under 2,000 reports cases of Covid-19. The government says it hopes to be able to resume international flights once restrictions are eased on foreign nationals globally. That won’t be any time soon.

Vietnam
Only Vietnamese citizens and work permit holders are being granted entry, provided they show a negative test certificate and fulfill the mandatory 14 day quarantine period. The Vietnamese government has said it hopes to end its ban on international flights for countries that have not recorded a new case of the virus for more than 30 days, but priority is expected to be given to foreign investors and experts, to get the economy going again. VietJet and Vietnam Airlines have announced tentative schedules for the resumption of international flights.

Japan
The government is hoping to ease travel restrictions and is in talks with some low-risk countries about reopening borders. Medical staff and those arriving on business are expected to be given priority and it’s likely they will have to agree to being tested and submit their travel itinerary.

Taiwan
For the most part, only Taiwanese citizens and work permit holders are being granted entry, all of whom have to undergo a 14 day quarantine period. The country is monitoring the situation in other countries carefully, saying any easing of border controls must be done with great caution. Taiwan is considered one of the most successful countries in the world in its handling of the outbreak.

Australia & New Zealand
Both countries currently have their borders shut to international arrivals, with the only exceptions being repatriated citizens and permanent residents, who must undergo a 14 day quarantine period. Both governments have also discussed a possible travel bubble, which might include the Pacific Islands, although New Zealand is reluctant to agree to this while Australia continues to allow unrestricted domestic travel.