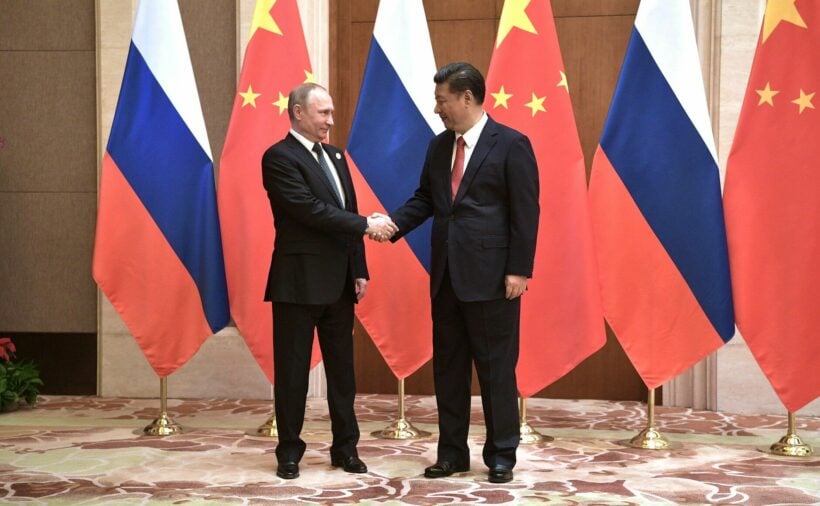 China has refused to condemn Russia’s attack on Ukraine, insisting it is not an invasion, and is standing by its biggest alley — without condoning its actions of unprovoked aggression on a sovereign nation. But its diplomatic ambiguity is forcing it to straddle an awkward line between Russia and the West.

Like it or not, China’s Xi Jingping has become an unwitting mediator between Russia’s Valdimir Putin and the Western world. Xi’s unrivaled friendship with Putin puts him in an exclusive position to speak some sense to the Kremlin’s increasingly isolated leader, whom Western media has describe as “unhinged” while nations on all sides slam him with sanctions.

It’s a role Xi certainly didn’t expect and didn’t sign up for. As such, China has repeatedly called for dialogue.

When Putin announced he was launching a major military offensive on Ukraine last Thursday, Xi was quick to give his pal a phone call. In a readout of their conversation on state broadcaster CCTV, Xi urged Putin to resolve the conflict through dialogue.

“China supports Russia and Ukraine to resolve the issue through negotiation.”

He further called for Russia to… “abandon the Cold War mentality, attach importance to and respect the reasonable security concerns of all countries, and form a balanced, effective and sustainable European security mechanism through negotiations.”

“[China is] willing to work with all parties in the international community to advocate a common, comprehensive, cooperative and sustainable security concept, and firmly safeguard the international system with the United Nations at the core.”

For his part, Putin said NATO and the United States had “long ignored Russia’s reasonable security concerns,” but that he was willing to engage in high-level talks with Ukraine.

On Friday, Foreign Minister Wang Yi told various European officials in a succession of phone calls that China respects the sovereignty of other countries — including post-Soviet bloc countries like Ukraine. But he also emphasised that the West needs to properly address Russia’s concern about NATO’s expansion in Eastern European countries.

China then abstained from voting on a draft resolution from the UN Security Council that would have deplored Moscow’s invasion of Ukraine. Western countries saw China’s abstention as a win — as opposed to an expected veto — which diplomats say was secured after a 2-hour delay for last minute negotiations with China.

“China is closely monitoring the latest situation. We call on all sides to exercise restraint to prevent the situation from getting out of control.”

When journalists questioned her refusal to use the word “invasion,” she was quick to defend Russia.

“This is perhaps a difference between China and you Westerners. We won’t go rushing to a conclusion… Regarding the definition of an invasion, I think we should go back to how to view the current situation in Ukraine. The Ukrainian issue has other very complicated historical background that has continued to today. It may not be what everyone wants to see.”

Notably, China still does not recognise Russia’s claim to Ukraine’s Crimean peninsula after the 2014 invasion. Yet China’s denial on an invasion, both then and now, is a clear contradiction to its own foreign policy, which is founded on the principle of non-interference other countries’ affairs.

In January, China celebrated 30 years of ties with Ukraine, which Xi Jinping praised as a sign of “deepening political mutual trust” between the two countries. Ukraine is a key peg in Xi’s the Belt and Road Initiative to connect China to Europe, promoting international business with China through special trade routes and diplomatic agreements.

On February 4, after summit at the opening of the Beijing Winter Olympics, Xi and Putin issued a joint statement criticizing the US’s “negative” influence in Europe and the Asia-Pacific. They also declared they would deepen a strategic partnership with “no limits” and oppose “the further expansion of NATO” in “Cold War era” approach.

In the weeks leading up to the invasion, many countries evacuated their diplomats and urged citizens to leave, including the US and the UK. Since the invasion, nearly 150,000 people have fled Ukraine to neighbouring countries, including Poland, Moldova and Hungary. Thailand is also successfully continuing its evacuation of Thai citizens.

Yet China is maintaining a façade of nonchalance. If they’re afraid, they aren’t showing it, lest Russia would see their evacuation of Chinese diplomats and citizens as a provocation or lack of trust. Beijing is holding fast to its balancing act, even at the cost of merely a few Chinese nationals stuck in a war-torn country not so far away.

Since Russia began its invasion four days ago, China’s embassy in Kyiv has advised Chinese citizens to stay at home and display a Chinese flag on their cars if they drive anywhere. A planned evacuation envoy has been postposed till after the conflict, citing dangerous conditions in the country.

On Sunday, Chinese ambassador Fan Xianrong posted a video message on the embassy’s official WeChat account on Sunday, reassuring Chinese nationals stranded in the country that he was still with them…

“We must wait until it is safe before leaving… As long as safety conditions are met and everyone’s safety is guaranteed, we will make appropriate arrangements.”

For Xi, the Russian invasion and resulting war in Ukraine creates a great amount of uncertainty in a year in which he needs stability, as he looks to secure his third 5-year leadership term in office this fall. Surely he will get it, but will he also win the hearts of his people?

With the homerun of the Olympics propaganda campaign firmly behind him, perhaps his domestic popularity and will depend on whether he can stay on the balancing beam between Russia and Ukraine — or build a bridge of peace between them. Doing so would also be a sizable step toward salvaging his image on the world’s stage.