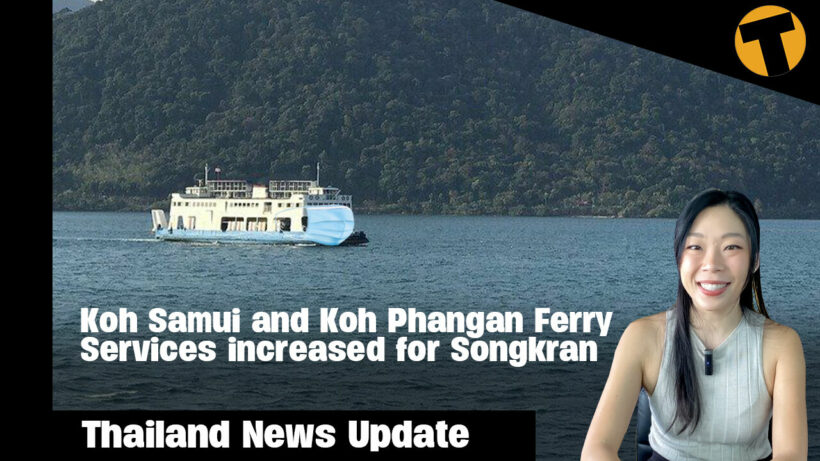 Just starting our bulletin today with a quick note about the new XE Omicron variant that has now been detected in Thailand. We are doing more about this in Good Morning Thailand program today. The key point is that, given the current knowledge, the variant appears no more likely to produce severe symptoms than the other Omicron variants. The one patient identified in Thailand with Omicron XE has already fully recovered. Whilst it appears to be up to 10% more transmissible, that’s about the only take-away from this new variant at this time.

Businesses on Bangkok’s popular Khao San road are saying goodbye to any plans for Songkran celebrations following news that they would have to follow such draconian restrictions, it would make any semblance of ‘fun’ impossible. Th restrictions included an alcohol ban, having to provide free face masks to partiers if their masks got wet, being held responsible if partiers took off their masks, and testing people coming for the activities. The president of the Khaosan Road Business Operators Association says that some smaller business owners still insist on holding celebrations, even though water splashing in public areas and roads won’t be allowed this year. The Bangkok Communicable Disease Committee did decide to allow “water sprinkling” in specific areas that had sought permission, although officials did not explain exactly what that means. He says the Songkran holiday will be business as usual for owners, just without the water fights. The president added that he expects 30-40% of hotel rooms to be occupied, and for more Thais to visit the area to dine and drink during the Songkran week. Songkran will run from April 13 up to April 17, taking in the weekend.

The Phuket man who won 18 million baht in the lottery on Friday was officially presented with his winnings. In cold hard cash!Lottery organisers arrived at the man’s house in a red Ferrari over the weekend with his cash, and also a hard copy of his winning ticket, which was numbered 970618. The man’s friends and family were at his house celebrating him, and welcoming the lottery representatives (you bet they were). The man, Panuwat, had owed 10 million baht in debt, and prayed at several temples in hopes of winning the lottery. He said he would buy two to three lottery tickets a week, and regularly prayed to a ghost that many Thais believe grants people financial fortune. In addition to paying off his debt, Panuwat also wants to buy a better house for himself and his family. He says that he had learned lots of lessons after being in debt, and believes he should not waste the money on unnecessary things.Like many Thais, Panuwat bought lottery tickets that had numbers corresponding with something in his personal life that he believed would bring him luck. He said he regularly bought two or three Lottery Plus tickets with the numbers 8618, which correspond to his license plate registration number.

Pattaya police have arrested 10 people after busting a gambling party in the Bang Lamung district of Chon Buri. An undercover agent had tipped off the police, saying a gambling party was secretly being held in an abandoned area of the neighbourhood. After the police arrived, the alleged gamblers tried to flee, but police were able to catch 10 of them. The police found gambling paraphernalia such as cups, dice, scoreboards, and roosters for an alleged illegal cock fight. Cock-fighting is technically legal in Thailand, however, gambling on the fights is not. The 20 officers who raided the party were from the Crime Suppression Division. The Superintendent of Pattaya Police Station urged people to immediately report any form of illegal gambling in Pattaya area to Pattaya Police Station.

Ferry services in Koh Samui and Koh Phangan are trying to meet an influx of tourist demands leading up to Songkran. The ferry port MD at the Raja Ferry terminal at Don Sak says that the port plans to see the most tourists it’s seen in 2 years. Since Songkran will overlap with a full moon this year, many tourists are expected to go to full moon parties, particularly the famous one on Haad Rin at Koh Phangan. The director said the Raja Ferry Company will add as many boats and bus services as possible in a bid to minimise disappointment for passengers during Songkran. He stressed that ferries will operate under Covid-19 safety precautions, including the wearing of face masks and social distancing. Tourists will also be required to present vaccine certificates before boarding. The director said 80% of trips at the Raja Ferry Port are already booked, and all trips will be fully booked by April 11. He urges wannabe tourists to book trips via the port’s LINE account at @rajaferryport to avoid disappointment.

Phuket’s Soi Dog Foundation is granting a donation of US$250,000 to a clinic in Poland for Ukrainian pets whose owners have fled Russia’s invasion. The money will also help a Polish animal society give immediate care to pets in desperate need right now. An estimated 40,000 dogs and cats have come with their owners to Poland since the invasion began in February. In the 19 years since the Soi Dog foundation was established, this will be its first time helping animals outside of Southeast Asia. Poland’s Society for the Prevention of Cruelty to Animals says pets are arriving hungry, dehydrated, and traumatised, and need medical help immediately. Some have travelled over land with their owners for days. The society operates 11 shelters across Poland. With the massive influx of Ukrainian pets in desperate need, the society has been running out of funds. The Polish animal society is already receiving some pet food donations from another animal care organisation. This means the pets it treats still have enough food for the time being, but the society needs more funds urgently.Soi Dog Foundation was founded by Jil and John Dalley, a retired couple in Phuket in 2003. Poland’s Society for the Prevention of Cruelty to Animals is Poland’s oldest and largest animal welfare nonprofit.

An abnormally strong high-pressure system over China has caused a cold spell in Thailand over the past few days. The Thai Meteorological Department says the high-pressure system is now covering most of Northern Thailand, where top temperatures had dropped by two to four degrees. Highs in the North are expected to peak today at 26-28 degrees Celsius.In Bangkok, the temperature fell to 21 degrees Celsius… unusually cold, especially in the middle of Thailand’s infamous hot season. After a cool start today, Bangkok will reach 33 degrees with a bit of cloud around. The southern region is warmer than the rest of the country, but is expected to have more rain, covering 70% of the area, with occasional heavy showers. The TMD says that this unusually cold weather, in the middle of the hot season, was also recorded six years ago. Back in 2021, a coldspell killed 10 tonnes of fish on a fishing farm in the northeastern province of Nakhon Phanom. The farmers said they lost 500,000 baht from the fish dying from the unusual weather.

DoUKnowWhoIAm
52 minutes ago, Thaiger said: He stressed that ferries will operate under Covid-19 safety In line with sustainable living, life vests have been recycled to face masks.
Cg66
I wonder when this vaccinated/unvaccinated rubbish is going to end. From My research at the beginning of this I found that it is normal science for those given a so-called vaccine to expel viruses to others once they have had…