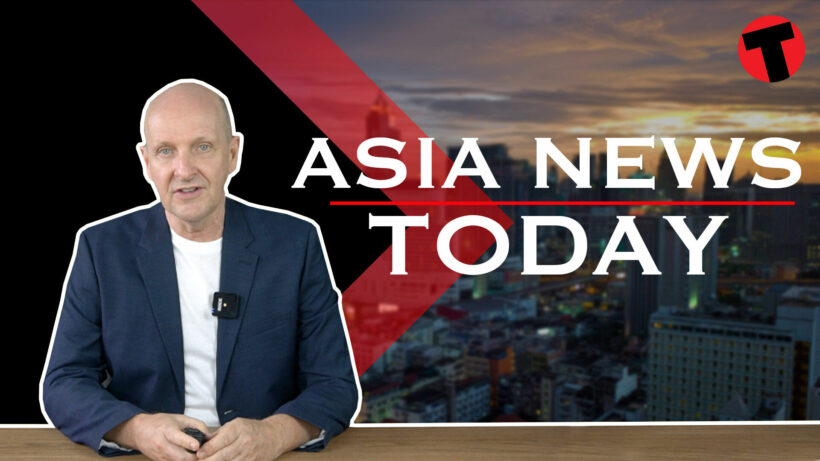 US prosecutors have accused a former Goldman Sachs banker of taking 35 million USD in kickbacks on the first day of a trial over the multibillion-dollar looting of the infamous 1MDB Malaysian government fund.Roger Ng, Goldman’s former head of investment banking in Malaysia, stands charged with conspiring to launder money.

The trial is renewing scrutiny of Goldman Sachs’s role in the international scandal that led to a 12-year jail sentence for Malaysia’s former PMr Najib Razak. Ng has pleaded not guilty and his lawyer has said he is a “fall guy” for one of the biggest financial scandals in Wall Street history. The trial in Brooklyn federal court could last up to six weeks.

Presidential candidates in South Korea kicked off their campaigns today in what’s been dubbed “the unlikable election” due to high disapproval ratings of the the two main candidate’s from the ruling Democratic Party and its conservative rival the People Power Party. It’s pegged to be the closest race in 20 years between the two main parties, which have been dominated by scandals, allowing a third candidate to play the potentially role of kingmaker.

Meanwhile, polls show that Korean votes are seeking a president who could mitigate the inflation of housing prices and the rich-poor divide, as well as end corruption and polarizing politics. But petty controversies and sandals like a candidate’s relationship with a shaman have drowned out the big ticket issues, such as confronting North Korean’s missile program, which may hold sway in the March 9 election.

A January poll shows the popular politician, son of the late Philippine dictator Ferdinand Marcos, has a 44 point lead over his incumbent candidate, with 60 percent of respondents choosing Marcos, compared to just 16 percent for the current Vice President.

Meanwhile, retired boxing legend Manny Pacquiao trailed in the polls with just 8 percent of the votes. If Marcos wins the election, he would restore honor to the family name, which was shamed 36 years ago when a “people’s power” revolt ended his father’s dictatorship.

From today, Vietnam is lifting Covid-19 curbs on international flights from all markets, with no limits on flight numbers. The announcement comes from the Civil Aviation Administration of Vietnam. Vietnam imposed strict border restrictions in the early days of the pandemic, which initially proved successful. But, just like Thailand, the measures have critically damaged the country’s tourism sectors, which previously accounted for around 10-20% of GDP.

Some international flights to Vietnam have already resumed from 15 markets since the beginning of this year, with the government easing quarantine requirements and vaccinated arrivals only required to self-isolate for 3 days. Since the start of the pandemic, Vietnam has reported over 2.5 million Covid-19 infections and nearly 39,000 deaths. The country has now administered 2 vaccine doses to nearly 98% of its 98 million population.

After originally pointing the finger at a Space X rocket that will crash into the moon next month, Astronomers now claim the doomed rocket is of Chinese origin. A rocket heading for impact with the lunar surface on March 4, was originally thought to be built by Elon Musk’s company, Space X. But now they’ve identified the wayward craft as the booster for a Chinese Chang’e 5-T1, launched back in 2014 as part of the Chinese space agency’s lunar exploration program.

Astronomer Bill Gray, who first identified next month’s lunar collision, admitted his mistake last weekend.For their part, NASA has turned lemons into lemonade but saying that the impending explosion into the lunar surface, no matter the origin of the spacecraft, is an “exciting research opportunity”.

Myanmar’s military have decided not to attend an ASEAN meeting in Cambodia this week, dissing an invitation to send a non-political representative instead of the Junta’s chief diplomat. The decision to restrict Myanmar’s participation in the ASEAN meeting reflects a disagreement over Myanmar’s lack of cooperation with the South East Asian trading bloc to help ease the political crisis follow last year’s February coup.

The latest stand-off from the Burmese military follows last October’s ASEAN meeting with the leader of the Junta, Senior General Min Aung Hlaing, wasn’t invited to the virtual meeting of Asean leaders. Under the ASEAN annual annual rotation system, Cambodia is now the Chair of the group. Cambodian PM Hun Sen says he believes it is important that Myanmar attend the next summit meeting.

Women’s groups and people across gender lines came out yesterday to criticize a Malaysian federal minister who appeared to endorse domestic violence in one of two short videos she posted on social media.

She said…. quote….Husbands are allowed to use a “gentle but firm physical touch” that is “educational” on recalcitrant wives…. This from Siti Zailah Mohd Yusoff, the deputy minister for women, family and community development.

The MP from the Malaysian Islamic Party also advised men to use counselling and sleep separately from their spouses for three days, saying that Islam recommends such measures for when their wives do something they disapprove of.She also recommended that women make sure their husbands had eaten, prayed and were in a good mood before approaching a difficult subject to ensure harmony at home. The videos have been viewed more than 40,000 times.

New coronavirus infections are declining in many parts of Japan, but serious cases are still on the increase.10,334 new infections were reported, for a 6th straight day of week-on-week decline. But seriously ill patients on artificial respiration has risen to 74.

The number of cases deemed serious across the country remains at 1,400 as of yesterday, amid high hospital occupancy rates. Quasi-emergency measures are set to expire in 21 prefectures by this Sunday but some are considering extending them.

As the Singapore Airshow kicks off today, plane manufacturers are hoping to secure big deals with airlines at the four day event featuring aviation’s finest. Airbus expressed optimism that it’s new A350 freight plane will sell well against Boeing’s 777X freighter.Qatar Airways has already secured a launch order of the future Boeing freighter, following a dispute with Airbus, as well as 25 of the controversial Boeing 737 MAX jets.

Meanwhile, delegates say that Singapore Airlines could confirm a provisional order for the new Airbus freighter this week.Both Boeing and Airbus have agreed to convert existing passenger planes into cargo carriers to offset the growing demand for cargo aircraft globally.

But coronavirus isn’t the only thing stoking fear in travellers. In Malaysia, fliers now have to watch out for snakes on a plane. An AirAsia passenger flight was force to make an emergency landing, when passengers spotted a snake slithering in the overheard luggage compartment. Malaysia’s budget airline confirmed the incident, which took place last week on a domestic flight from KL to to the east coast of Borneo Island.

The captain landed the plane in Kuching, about 900 kilometres west of its intended destination, to allow the plane to be fumigated.Passengers were safely transferred to another flight…. This time without snakes.