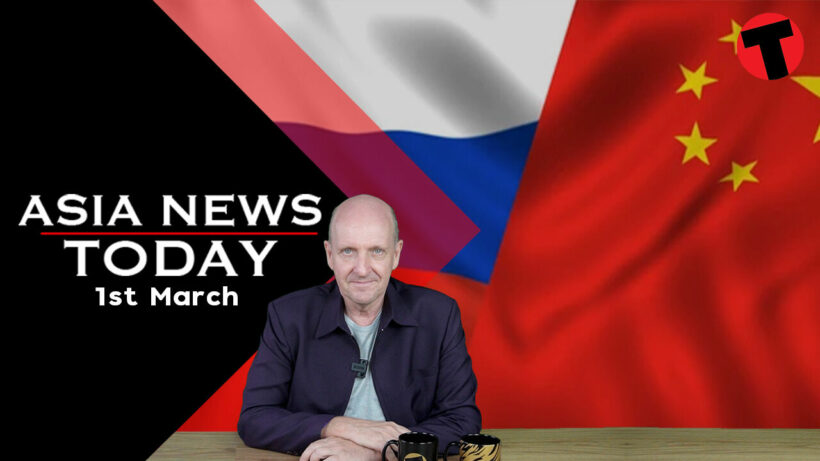 South Korean schools are being reopened at the same time the country is facing its worst surge of Covid infections with daily numbers surpassing 200,000 for the first time. Whilst schools were offered the option of still teaching online, most opened their gates yesterday for the new academic year. Schools were allowed to opt for online learning, but many opened their gates on Wednesday (March 2). South Korea’s Education Minister said that schools were now “experienced enough to safely run classes” after two years of the pandemic. But the ministry is also advising students to conduct rapid antigen tests twice a week before going to school. South Korea reported 219,241 new infections yesterday, the vast majority the less severe but highly transmissible Omicron variant.A spokesman for the South Korean Ministry of Health and Welfare yesterday speculated that he believed that the country may be near the peak in Covid daily infections.

There’s a meeting of ASEAN with the US scheduled for March 28 and 29, and the US are following ASEAN’s lead by inviting a non-political representative from Myanmar, instead of someone from the military or even the former elected government. Then again most of the former elected leaders are still being detained by the military, some 13 months after the coup.US President Joe Biden has scheduled a special summit of the United States and ASEAN leaders for the end of March. Addressing Myanmar with its former name, Burma, a spokesperson from the US State Department said that the US supported the ASEAN approach in engaging with a non-political participant in the talks.Late last year, ASEAN barred Myanmar’s military junta from group meetings after failing to honour an earlier plan with the bloc to end violence in the country since the generals seized power, killing hundreds, displacing over 300,000 people, and triggering an exodus of foreign companies.The White House summit is planned to step up US engagement with the Asia Pacific region in efforts to push back against China’s regional power.

It’s emerged that senior Chinese officials made formal requests to senior Russian officials in the weeks before the Winter Olympics in Beijing, not to invade Ukraine until after the event was over. The New York Times quotes senior Biden administration and European officials. The New York Times report suggests that senior Chinese officials had at least some level of information about Russia’s intentions to invade Ukraine. The Winter Games finished on February 20…. Russian President Vladimir Putin launched the invasion into Ukraine last Thursday, four days after the completion of the Beijing event. As a follow-up, a source, apparently familiar with the matter, has confirmed to Reuters that China had made the request but declined to provide details.Neither the US State Department, the CIA or the White House National Security Council have responded to the New York Times story.

The Japanese Ministry of Defense has perorated that a Russian helicopter had violated Japan’s northern airspace. The Japanese Defense Ministry noted that there had been an intensification of Russian activity in both the seas and airspace, and remains a concern for the country with repeated violations of Japan’s airspace. The Ministry of Defense said it will continue to take all possible measures… as they say…. “24 hours and 365 days of the year to protect the peaceful lives of Japan’s territory and its people.”

With Vietnam poised to reopen to international travellers in two weeks, the US CDC has upped Vietnam’s risk level to “Level 4,” citing high Covid infections and encouraging Americans not to travel to the country when it does reopen.Vietnam is opening it borders of March 15, due to the relatively low number of hospitalisations and deaths due to the Omicron variant. According to Travel + Leisure, more than 130 destinations around the world are designated as “Level 4: Do Not Travel”. Some of those locations include Mexico, France and Spain. You’ll end up on the DCD “Level 4” list if you reports more than 500 cases of COVID per 100,000 people, over the last 28 days. Vietnam is currently reporting a sharp spike in positive cases, yesterday recording over 110,000 positive infections in one day, the highest daily number of the entire pandemic in Vietnam.Whilst the US CDC urges travellers to avoid Vietnam entirely, it states that keeping up-to-date with the latest vaccinations and taking proper precautions, such as wearing a mask in public spaces, can help keep travellers safe while in the country.

Now if you do want to visit Vietnam from March 15, you’ll need to apply for a visitor’s visa, provide proof of full vaccination or a recent recovery, and take a PCR test before your departure to Vietnam. Once you arrive there you’ll have to quarantine for one day when you arrive. You’ll have to then show a negative self-administered ATK test. If negative, you’ll be free to travel throughout the country. You will also need to show a travel insurance policy valued at least US$20,000.

Australian rules Football, the very Aussie version of football which is massively popular in the land down under but not really anywhere else, is becoming more popular in nearby Indonesia. According to AFL Asia, they report that there’s been “a considerable increase in female participation” in the sport in both Jakarta and Bali over recent years. AFL Asia also reported a 99 per cent rise in participation in development and promotion programs across Indonesia over the same time. The rise of popularity of the game has also led to a number of new mixed domestic league teams, like the Jakarta Bintangs and the Bali Geckos.But Iain Shearer, from AFL Indonesia and founder of the Krakatoa’s, says that Australian rules Football is not as popular as soccer in Indonesia, but continues to see rapid growth with high rates of participation. Last year about 8,000 Indonesian students went through the AFL Asia development program. The Bali Geckos said they planned to host a women’s tournament in Bali later this year with other teams from Asia, and possibly Australia, coming to play.

Marc26
7 hours ago, riclag said: Never get tired of criticism! Some prospective travelers come to these forums to get a sense of what others think of the pros and cons of restricted travel. It would be a disgrace to deny…
HiuMak
now we are talking
Travel101
Great points. I'm all for the scrapping of The Thailand Pass and PCR testing. It's Endemic Time. Let's ACT Swiftly! I took my Waverunner around 360 - Koh Lan pathetically empty chairs. I viewed all resorts and beaches from the…
butterfly
27 minutes ago, Travel101 said: The upside: flawless traffic flow BKK - Pattaya, Rayon. Nice new wide highways - very few cars and exquisitely clean air! and you want to change that by opening up Thailand to mass tourism again? 😛

Cabra
1 hour ago, Travel101 said: The upside: flawless traffic flow BKK - Pattaya, Rayon. Nice new wide highways - very few cars and exquisitely clean air There is nothing flawless about BKK traffic flow, nor will the air ever be …

Much of Australian state under water as 200,000 people ordered to flee flood