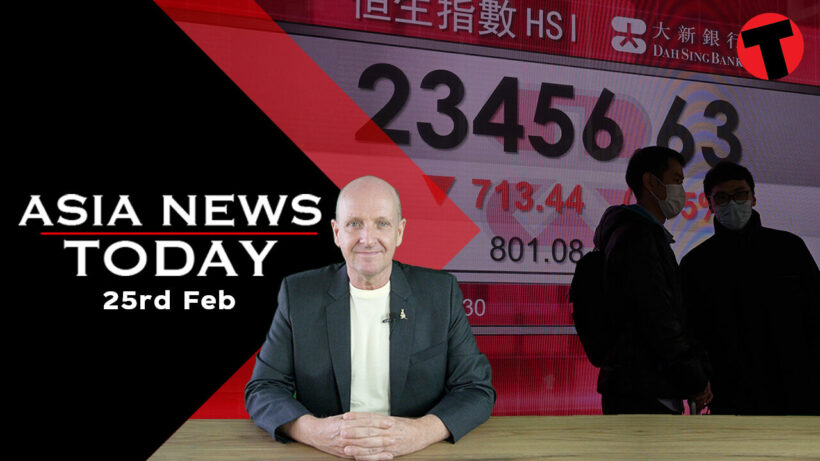 In the Asia Pacific region, only Japan, South Korea and Australia have so far officially condemned the actions of Russia after its invasion of Ukraine yesterday. They’ve said they will join with the US in imposing international sanctions but have so far declined to add unilateral sanctions. Indonesia has taken a slightly different tack and is calling for negotiation and diplomacy after the Russia invasion, while stopping short of announcing sanctions on Moscow. Both Indonesia and Thailand have instructed their citizens in Ukraine to gather at the embassies for a possible evacuation. And China has stood alone in failing to condemn the attack and instead is accusing the US and its allies of worsening the crisis.China even went further by approving imports of wheat from Russia, a move that could reduce the impact of Western sanctions. Russia, one of the biggest wheat producers, would be vulnerable if foreign markets were closed off.

Asia-Pacific shares have shown a small rise as investors assessed the Russia-Ukraine conflict following a massive comeback on Wall Street overnight.Japan’s Nikkei 225 was up1.05%. The S&P/ASX 200 in Australia advanced 0.4%Brent crude oil futures gained 2.3% to settle at $99.08 per barrel.… something we’re all going to feel at the petrol pumps.Spot gold, traditionally a safe haven in times of uncertainty, last traded at $1,905.56, but up only 0.13%.Bitcoin also stemmed it recent losses with a 2% rally over the past 24 hours.

The Philippine government is allotting the equivalent of US $49 million in fuel subsidies for public transport drivers, as oil prices keep surging after Russia’s attack on Ukraine. The Development Budget Coordination Committee says the amount will be used for the Department of Transportation’s fuel subsidy program, where 377,000 drivers will be given fuel vouchers. This is now on top of the Department of Agriculture’s 500-million peso budget for affected farmers and people working in the fishing industry. Even before Russia’s attack on Ukraine, fuel prices in the Philippines had increased for eight consecutive weeks.

South Korea’s central bank has kept interest rates steady yesterday, taking a break after back-to-back rate hikes. The decision was based around both the surging coronavirus cases in South Korea and escalating tensions in Ukraine. The Bank of Korea held the benchmark interest rates unchanged at 1.25%. It also raised inflation forecasts for 2022 from 2.0% to 3.1%. The rate decision was the last policy review for the bank’s outgoing governor… his successor will likely need to take interest rates higher to control the rising inflation in the South Korean economy, in line with other major central banks.

In Thailand, despite challenges of rising inflation rates and the costs of development, property developers are being told to prepare for a post-pandemic boom. A senior executive vice-president at Bangkok Bank, said Thailand is entering a new economic phase over the next two year following two years of lacklustre activity.He noted that Thailand’s property market was going though a transitional period with fluctuations. If we can make it through, we should be able to ride Asia’s economic growth wave which should kick off in the next two years.He said there would be fluctuation in the global trade and financial system, geopolitical conflicts, technological disruption and competition in the age of the Asian century. But he foreshadowed a flight to longer term property investment and Thailand being in the hot seat, ready to take advantage of the pent-up demand.

Finally, whoops! A Chinese news outlet appears to have accidentally leaked its own censorship instructions during coverage of the situation in Ukraine.According to the now-deleted Weibo post, the Beiking News-owned Horizon News, noted that any comments and reports deemed unfavourable to Russia or favourable to the West can’t be published.Users of the Wiebo platform, a sort of Facebook equivalent in China, managed to get some screenshots and spread them online before officials scrambled to delete the original Weibo post.Just a few weeks ago, during the opening of the 2022 Beijing Winter Olympics, the Chinese President Xi Jinping and Russian President Vladimir Putin declared their “friendship” has “no limits” and “no ‘forbidden’ areas of cooperation”.Notably, the Russian president affirmed his opposition to Taiwan’s independence.