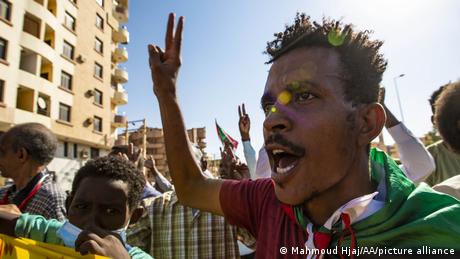 Sudanese protesters have taken to the streets to call for democracy and an end to military rule after the deposed civilian prime minister, Abdalla Hamdok, pledged to return to the government jointly led with the military.

Nearly four weeks after a military coup, Hamdok was reinstated on Sundaywhen he signed a 14-point power-sharing deal with General Abdel-Fattah Burhan.

“Sudanese blood is precious, let us stop the bloodshed and direct the youth’s energy into building and development,” Hamdok said after signing the deal.

The new deal, however, was rejected by the civilian coalition Forces of Freedom and Change (FFC), which shared power with the military before the October 25 ousting.

Following last month’s coup, when General Abdel-Fattah Burhan had dissolved the Sudanese government and declared a state of emergency, protests quickly turned violent. At least 41 people were killed and many others were detained.

Rania Aziz, a 36-year-old activist in Sudan’s capital Khartoum, was one of the protesters marching against the military’s move.

“We have been very clear in our demands since the revolution started. Actually, the people have never approved or agreed to the power-sharing deal,” she told DW in a video call, referring to the 2019 protest movement that led to the establishment of the civilian FFC coalition.

For her, the fact that Hamdok signed a deal with the coup’s military leaders without the backing of the civilian coalition is “a setback, even a disgrace.”

One key reason for the recent protests by the FFC is that the deal only reinstates the prime minister — and not the rest of the civilian government.

“We affirm our clear and previously declared position that there is no negotiation, no partnership, no legitimacy for the coup,” the faction said in a statement.

Theodore Murphy, director of the Africa program at the European Council for Foreign Relations, told DW: “Sunday’s political agreement is understood as not even a return to the status quo but a diminishment of the civilian’s role to a junior partner.”

The difficult situation with the disputed joint-government, he adds, is further exacerbated by the impression that “the revolution has been betrayed by one of its most high-profile representatives: Prime Minister Hamdok.”

Contrary to the country’s activists, many countries have signaled appreciation for Sudan’s civilian and military handshake.

“I am encouraged by reports that talks in Khartoum will lead to the release of all political prisoners, reinstatement of Prime Minister Hamdok, lifting of the state of emergency, and resumption of coordination,” US Secretary of State Antony Blinken tweeted.

“I also reiterate our call for security forces to refrain from excessive force against peaceful protesters,” he said.

Murphy believes that European states and the EU are also more likely to embrace “something that is already on the table and work to improve it, as failure to do so amounts to undermining the highest-ranking official civilian government counterpart, namely Abdalla Hamdok.”

Sudan’s regional neighbors, however, seem to have laid out and stuck to their own agenda long before the coup.

“Sudan has been experiencing a very threatening, transitional period since 2018, and the situation was aggravated by regional interests that consider building a democratic state amid the region as a threat,” said Sudanese activist Aziz.

Murphy echoes this view. “Since the transition brought about by the revolution in 2018 and 2019, Sudan’s political map is a new reality and neighboring countries such as Egypt and the Emirates, as well as Saudi Arabia, have different relationships with different parts of that government which impacts their position.”

Egypt, in particular, has had long-standing ties with Sudan’s armed forces. “They see some similarities with their own experience during their own travel through a kind of popular revolution and then establishing stability,” Murphy said.

However, instead of openly supporting Burhan, Egypt has remained silent. “We’ve seen an absence of Egypt’s voice in public statements,” Murphy observed.

The two other regional key allies of Sudan — the United Arab Emirates and Saudi Arabia — have built a diplomatic formation called the “Quad” with the US and the UK. Together, they had issued a joint statement on November 3, highlighting the need to restore the civilian component of the civilian-military transitional government as well as the release of the then-detained Prime Minister Abdalla Hamdok, his wife and other senior officials — demands that were all met with Sunday’s power-sharing deal.

However, the current political turnaround has left many residents disappointed, angry, and with a bitter aftertaste.

For activist Aziz, protesters will go on taking their demands to the streets. “We shall not delay it,” she told DW. “Streets never betray, the fight continues.”