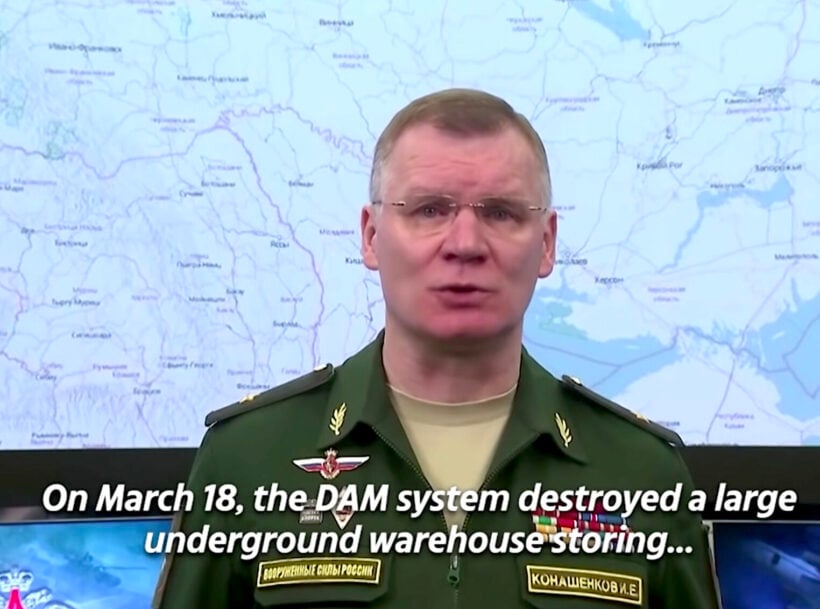 UPDATE: In their daily fact-checking segment, France 24 has debunked Russia’s false claim that it struck an underground weapons depot with a hypersonic missile. Their journalist explains that, while the Russian military might have indeed used a hypersonic missile, they actually struck a farm, NOT a military target…

“The Russian Ministry of Defence claims that they launched hypersonic missiles against Ukraine. In the video released on Russia’s MOD Twitter page on March 19, there are questions regarding the exact location of the video. We tell you more in this edition of Truth or Fake, @france24 daily fact-checking segment.”

Russia claims it struck an underground Ukraine weapons depot with hypersonic missiles on Friday, destroying the depot. The Kinzhal missiles used are part of a collection of hypersonic weapons Russia’s President Putin introduced in 2018. A Russian defence spokesman said yesterday that Russia also destroyed Ukrainian military radio and reconnaissance centres near the city of Odessa with another one of its missile systems.

A spokesperson for Ukraine’s airforce confirmed a Russian missile strike in the Ivano-Frankivsk region on Friday, without giving further details. The Russian spokesman said the Ukrainian depot its missiles destroyed was used to store missiles and aircraft ammunition. Reuters couldn’t independently verify the spokesman’s statements.

President Putin said in December that Russia was the global leader in hypersonic missiles. He said the missile’s speed, manoeuvrability, and altitude make them hard to track and intercept.

On Friday, the UNCHR said at least at least 847 Ukrainian civilians had been killed, and 1,399 wounded, since the conflict began on February 24. It said 36 people killed have been children. Most of the casualties were from explosive weapons such as shelling from heavy artillery and multiple-launch rocket systems, and missile and air raids, the UN agency said. The UN estimates 6.5 Ukrainians are internally displaced by the war. 3.2 million have fled the country.

Related Posts  Preparations for the emergency session of the Thai Parliament

Tim_Melb
On 3/24/2022 at 8:33 PM, Stardust said: A example for supply and logistic 😄 https://inews.co.uk/news/ukraine-civilians-shaming-russian-soldiers-viral-clips-man-offers-tanks-tow-back-to-russia-1486022 Funny how the so called "Russian" vehicles (note that the Ukrainians use the same vehicles) don't have the 'Z' painted on the side that the…
Rookiescot
1 hour ago, AdvocatusDiaboli said: With a large number of Russian made military equipment failures during the last month, it may not bode well for the Russian Arms industry going forward. Russian equipment always was crap. And their logistics is…
astro
11 minutes ago, Rookiescot said: at is happening with all the wounded? He can of course lie to the next of kin saying they were killed by a bear in Siberia but those wounded guys are going to get home…

AdvocatusDiaboli
18 minutes ago, Rookiescot said: Do the forum rules allow us to open a book on this or what? but gambling not allowed in Thailand …. So maybe not 😉
Rookiescot
7 minutes ago, astro said: They were ambushed and shot in the back by Ukrainian NeoNazi saboteurs and US undercover agents. Its the only possible logical explanation after all.