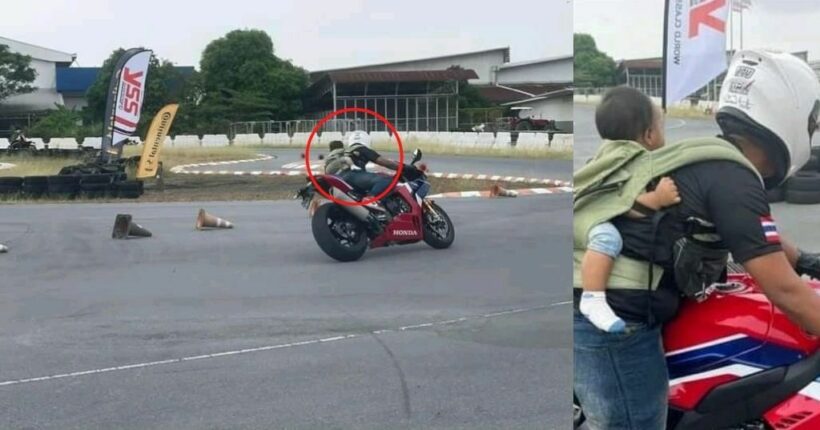 Organisers from a recent motorcycle event are apologising for allowing a man to test drive a big bike while his baby was still in a carrier strapped to his back. An official from the event said people were allowed to test drive the big bikes on the track, but no one noticed the man was carrying a baby. The official added that riders were not allowed to exceed a speed of 50 kilometres per hour.

Photos of a big bike rider with a baby strapped to his back while at a motorcycle event drew attention from Thais on social media with concerns about the child’s safety. The baby, who seems to be just a few months old, was seen strapped to a carrier on the father’s back. The man posted photos on Facebook of himself riding a big bike, but removed the post after complaints from Thai netizens piled in, criticising the man as well as the motorsports staff for their recklessness.

An official from the race track shared that the incident happened during a motorcycle event where different companies and distributers offered a driving test. The official said the staff didn’t notice that there was a baby on the rider’s back, and they thought it was a backpack. They also insisted that the speed was limited to only 50 kilometres per hour, and it wasn’t a racing campaign. The team said sorry for the recklessness and promised to prevent a similar case.

Pattaya says NO to water fights & parties for Songkran | GMT