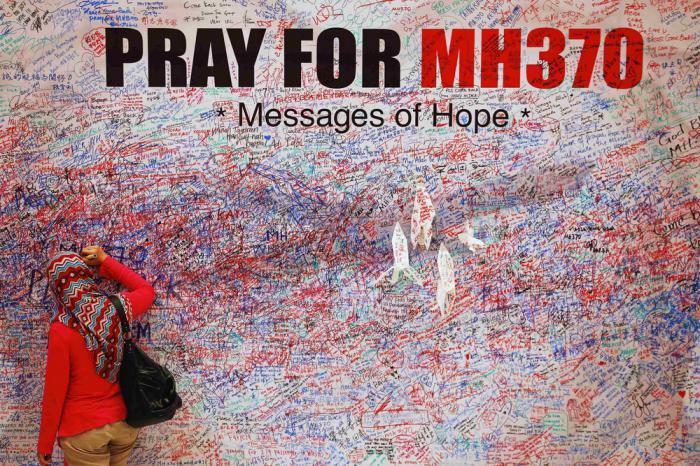 PHUKET: The last words from the cockpit of missing Malaysia Airlines Flight MH370 – “all right, good night” – were uttered after someone on board had already begun disabling one of the plane’s automatic tracking systems, a senior Malaysian official said.

Both the timing and informal nature of the phrase, spoken to air traffic controllers as the plane with 239 people aboard was leaving Malaysian-run airspace on a March 8 flight to Beijing, could further heighten suspicions of hijacking or sabotage.

The sign-off came after one of the plane’s data communication systems, which would have enabled it to be tracked beyond radar coverage, had been deliberately switched off, Acting Transport Minister Hishammuddin Hussein said on Sunday.

“The answer to your question is yes, it was disabled before,” he told reporters when asked if the ACARS system – a maintenance computer that sends back data on the plane’s status – had been deactivated before the voice sign-off.

The pilot’s informal hand-off went against standard radio procedures, which would have called for him to read back instructions for contacting the next control centre and include the aircraft’s call sign, said Hugh Dibley, a former British Airways pilot and a Fellow of the Royal Aeronautical Society.

Investigators are likely to examine the recording for any signs of psychological stress and to determine his identity to confirm whether the flight deck had been taken over by hijackers or the pilot himself was involved, he said.

Malaysian investigators are trawling through the backgrounds of the pilots, crew and ground staff who worked on the missing Boeing 777-200ER for clues as to why someone on board flew it perhaps thousands of miles off course.

Background checks of passengers have drawn a blank but not every country whose nationals were on board has responded to requests for information, police chief Khalid Abu Bakar said.

No trace of the plane has been found more than a week after it vanished but investigators believe it was diverted by someone with deep knowledge of the plane and commercial navigation.

Malaysia briefed envoys from nearly two dozen nations and appealed for international help in the search for the plane along two arcs stretching from the shores of the Caspian Sea to the far south of the Indian Ocean.

“The search area has been significantly expanded,” Hishammuddin said. “From focusing mainly on shallow seas, we are now looking at large tracts of land, crossing 11 countries, as well as deep and remote oceans.”

The plane’s disappearance has baffled investigators and aviation experts. It disappeared from civilian air traffic control screens off Malaysia’s east coast less than an hour after taking off from Kuala Lumpur en route to Beijing.

Malaysian authorities believe that, as the plane crossed the country’s northeast coast and flew across the Gulf of Thailand, someone on board shut off its communications systems and turned sharply to the west.

Electronic signals it continued to exchange periodically with satellites suggest it could have continued flying for nearly seven hours after flying out of range of Malaysian military radar off the northwest coast, heading towards India.

Malaysian officials briefed ambassadors from 22 countries on the progress of the investigation and appealed for international cooperation, diplomats said on Sunday.

An experienced pilot, Zaharie has been described by current and former co-workers as a flying enthusiast who spent his days off operating a life-sized flight simulator he had set up at home.

Earlier, a senior police official said the flight simulator programmes were closely examined, adding they appeared to be normal ones that allow players to practice flying and landing in different conditions.

Police sources said they were looking at the personal, political and religious backgrounds of both pilots and the other crew members. Khalid said ground support staff who might have worked on the plane were also being investigated.

A second senior police official told Reuters investigators had found no links between Zaharie, a father of three grown-up children and a grandfather, and any militant group.

Postings on his Facebook page suggest the pilot was a politically active opponent of the coalition that has ruled Malaysia for the 57 years since independence.

A day before the plane vanished, Malaysian opposition leader Anwar Ibrahim was convicted of sodomy and sentenced to five years in prison, in a ruling his supporters and international human rights groups say was politically influenced.

Asked if Zaharie’s background as an opposition supporter was being examined, the first senior police officer would say only: “We need to cover all our bases.”

Malaysia Airlines has said it did not believe Zaharie would have sabotaged the plane and colleagues were incredulous.

“Please, let them find the aircraft first. Zaharie is not suicidal, not a political fanatic as some foreign media are saying,” a Malaysia Airlines pilot who is close to Zaharie told Reuters. “Is it wrong for anyone to have an opinion about politics?”

Co-pilot Fariq was religious and serious about his career, family and friends said.

The two pilots had not made any request to fly together.