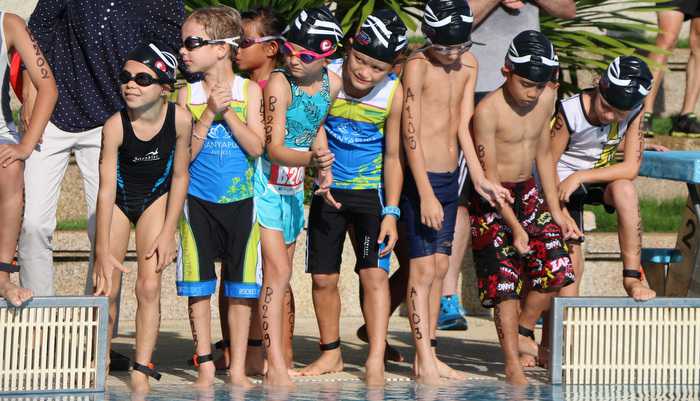 PHUKET: Triathlon is up there with the most demanding, high-performance sports. The idea of combining an intense swim, a high-speed bicycle ride and a long run into one, exhausting race is not for the faint-hearted. Or is it? More than 200 children aged between 6 and 18 took part in the Thanyapura Junior Challenge on Saturday, proving that a triathlon is truly a sport for everyone.

Many adults claim that today’s kids spend all their time glued to their gaming consoles. But not the kids at Thanyapura. Especially as you can’t just get up from your sofa and complete a triathlon – you need some preparation – and so do the children.

“We advise kids to prepare for the event through regular physical activity,” says Michael Dhulst, Thanyapura’s director of sports.

“You need the skill set, you need to know how to swim, you need to be able to ride a bike and we advise to be generally active – it’s something we promote here at Thanyapura.”

All the action from Saturday’s Junior Challenge triathlon. Video: PGTV

All this preparation is necessary not only to win the race, but also to make it to the finish line, something that is a primary goal for many amateur athletes out there.

“A triathlon always has two aspects,” says Michael, “There is the high-performance competition, where athletes race to the podium, but there’s also a big group of people who simply want to challenge themselves, to prove to themselves that they can achieve.

“A lot of kids enter the race just for fun. Of course, once they jump into the pool, a bit of a competitive spirit kicks in, but in general it’s all about fun.”

And that is fun for the family, with the track designed in a way that allows the parents to support their kids all along the way.

With safety in mind, a whole set of provisions is in place to keep the event secure and fun. The distances for each age group – 6 to 8, 9 to 12 and 13 to 18 years old – are adjusted to each age group’s capabilities according to international standards.

There are eight lifeguards on duty, plus coaches from the aquatics team, as well as volunteers. On the bike and running courses, local police and Thanyapura’s security provider guarantees the children’s safety – and last but not least, the event is organized in collaboration with Bangkok Hospital Phuket, so there is a medical tent and medical staff on standby.

In other words, it’s safe, fun and good for the kids. “It’s good for children to be physically active on a daily basis. It also helps them deal with problems, channel their stress and interact with other children,” concludes Michael.

But perhaps what matters the most in the end, is that the kids simply love it.