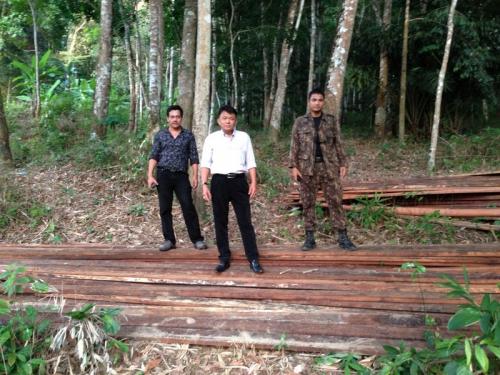 “We rushed to the site, where we found 200 pieces of wood cut from Malabar Ironwood and Malacca Teak,” Chief Veera said.

Both are protected species in Thailand, he explained.

“The workers had a second point, 500 meters away in a rubber plantation, where we found two Malacca Teak trees cut down and seven pieces of hewn lumber on the ground ready to be cut into planks,” Chief Veera added.

However, the officers found no workers at either of the two sites.

“The gang cut the wood to transport it out of the area, but I think when they were seen by local residents they were scared off. Also, there are two roads to the sites, so we could easily have missed them on our way up here,” Chief Veera said.

“We have contacted Forestry officials, as we believe the first site is within the boundaries of a protected forest. They will inspect and seize the wood as evidence and continue the investigation,” he added.